Moments of Joy and Awe Multiply on Redwoods Friday

A woman stood in awe, arms outstretched, at the base of an enormous ancient redwood and the gaping cavity at its base.

Across the road down the Redwood Loop Trail at Big Basin Redwoods State Park, children ran around the trunk of another mighty old giant, giggling with excitement.

Farther down the trail, Lola Kashyap of Cupertino, stepped toward a towering, perfectly columnar redwood. “Oh my goodness,” she said. “Just stunning!”

Wonder and smiles swept the faces of families and friends as they entered Big Basin forest, the largest expanse of ancient redwoods south of San Francisco. Some visitors jogged. Others zipped by on bicycles. Bailey Jennings and Spenser Brinkman of Chico beamed as they set out on a backpacking trip. They were among thousands who turned out for the “sold-out” event, which promotes the enjoyment and appreciation of California’s state trees and the state parks that protect these magnificent forests.

“We’re so lucky to live where we live,” said Kashyap said. “With a free pass, it’s all the better.”

In these days of virtual reality, it’s uplifting to witness so many moments of joy inspired by a real ancient realm, more fantastic than any fantasy.

Thanks to each and every park visitor for your willingness to spend Redwoods Friday outdoors in some of California’s most spectacular redwood parks. Your enthusiasm and support truly made Redwoods Friday a remarkable day. If you haven’t already, view and share some fun from the day with the hashtags #RedwoodsFriday and #CAStateParks. In 2015, Congress voted to reinstate the IRA Charitable Rollover and it is now a permanent part of the tax code! This legislation allows you to make tax-free charitable gifts from your IRA without claiming any increased income. And, your gift may count towards your minimum distribution requirement. 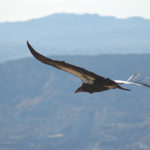 A Second California Condor Comeback is on the Horizon

California condors have been absent from the Pacific Northwest for over a century. But the Yurok tribe — whose ancestors lived along the Klamath River in Northern California — still revere and celebrate them. The sight of a condor flying over the redwoods has been erased from living memory, and, as tribe chairman Thomas P. O’Rourke told Audubon last March, “His absence is a hole in our hearts.”