I’ve been keeping a close watch on Western sword fern, the most common plant in redwood forest, for about a decade now and it appears that the recent weather is taking its toll on the ferns. Through our climate change tracking project, Fern Watch, we visit 10 coast redwood forests every summer to check for signs of fern stress as an indicator of how harsh weather impacts the forest. We go plot by plot in the woods, recording if the ferns survived since last year and if the surviving ferns have fewer or shorter leaves and more leaf damage from munching sawflies.

Tromping through the Oakland hills, Santa Cruz Mountains and the Big Sur Coast over the last week, we’ve noticed that the recent dry, warm weather caused fiddleheads to flush and unfurl faster than we’ve seen before. New fronds are the most sensitive because the plants haven’t yet invested in protecting young foliage by making them tough, thick, and full of chemicals that deter pests. While some fiddleheads were killed by the early May heatwave, many new fronds appear to have survived though sawfly larvae damaged many of the young fronds.

Down in Big Sur, we noticed that many  ferns have fewer fronds on average than they did last year. New leaves did emerge, so it seems the ferns are dropping their oldest leaves earlier than normal. Typically, sword fern keeps leaves for about 2.5 years, but during a drought, shedding old leaves that are less efficient at producing sugars may give young leaves a better chance of staying hydrated.

We have lots of sites to visit in the weeks ahead and we will you posted as to what we find. Want to get involved? Submit photos of sword fern through our Redwood Watch program and we will analyze the pictures for signs of fern health. To submit observations through Redwood Watch, click here. A brightly-colored new sword fern frond has been munched by a hungry sawfly larva. A small fern died at Big Basin this year, likely because of the recent drought. It’s almost Memorial Day weekend, and if you’re like me, you’re looking forward to spending the long weekend outside. Like ninety-five percent of Californians, I live in an urban area, and a quiet escape to the redwoods — even for just … Continued 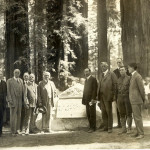 Of all the stories in the history of redwoods conservation, one of the most inspiring is how they came to serve as a living memorial to our veterans. In 1945, with victory in Europe and Japan within sight, individuals and … Continued