Safeguarding a critical part of the coast redwoods’ natural range.

Cascade Creek’s location makes it a regional ecological keystone. By connecting Big Basin Redwoods with the coastal prairies, wetland marshes, dune fields, and ocean bluffs of Año Nuevo, it provides contiguous habitat for myriad species that traverse this landscape. Protection of this 564-acre property is thus crucial—not just for the rich natural assets of the property, but also for the biodiversity and ecological health of lands from the Santa Cruz Mountains to the Pacific Ocean.

While the property’s forests and wildlife have thrived under the rigorous, decades-long stewardship of the current owner, the Holmes family, there is no certainty that future owners will have the same ethic—particularly with several spots on the property suitable for development of private home sites with ocean views.

With the goal of creating continuous protected redwood habitat from the Santa Cruz Mountains to the Pacific Ocean, Save the Redwoods League, in partnership with Peninsula Open Space Trust (POST), has announced an agreement to purchase Cascade Creek for $9 million. After a final fundraising push, we hope to complete this purchase in the near future.

Cascade Creek is one of the flagship projects of Forever Forest: The Campaign for the Redwoods, a comprehensive campaign launched by Save the Redwoods League in January 2020 to garner support for the organization’s ambitious vision for the next century of redwoods conservation. The League’s goal is to raise $120 million by 2022 to fund the first years of this centennial vision, which includes protecting entire landscapes through large-scale, strategic land acquisitions; restoring young redwood forests to become the old-growth forests of the future; and connecting all people with the beauty and power of the redwoods through transformational park experiences.

Fundraising for Cascade Creek is off to a strong start with a significant lead gift from the Gordon and Betty Moore Foundation, $2 million from POST, and a $500,000 gift from League Councilor Ralph Eschenbach and his wife Carol Joy Provan. Mr. Eschenbach and Ms. Provan have pledged an additional $500,000 matching gift. Private individuals have contributed $1.85 million through the Forever Forest Campaign. The Holmes Family has also made a land value donation of over $1 million. In December 2019, the California State Coastal Conservancy approved a grant up to $2.5 million.

The League plans to steward the property while studying the forest and developing a public access plan before transferring the land to a permanent steward. The League’s Director of Restoration Richard Campbell has already determined that, because of the owner’s longtime stewardship, very little ongoing restoration will be needed to ensure the ecological health of the property. The second-growth forest is growing rapidly in well-spaced stands on stable soils with adequate nutrients and water; it is developing the qualities of older forests already.

“The beauty of this unique part of the state is how the different ecosystems transition from one to another, all the while enriching the health of the greater whole,” said Catherine Elliott, the League’s Senior Manager of Land Protection. “It’s the kind of landscape that makes California special, and to know that it’s going to be preserved well into the future is incredibly gratifying.”

Elliott noted that this project wouldn’t have been possible without the generosity of the Holmes family. “The price we’re paying for the property is well below market value,” Elliott added. “The family’s foremost priority throughout our discussions was permanent protection for their beloved forest, not profit.”

The Holmes family has a long association with the redwood forest. Larry Holmes, the family’s representative in the Cascade Creek negotiations, said his father opened a sawmill in Arcata in 1949 to process redwood timber. In 1957, the family acquired a second mill near Santa Cruz to process second-growth timber and bought Cascade Creek in 1978.

While some logging was conducted on the property over the last 125 years, Cascade Creek has more than 100 acres of old-growth redwoods and numerous stands of large second-growth redwoods. Researchers recently studied four of the old trees and dated them between 420 and 528 years old. They also identified a 100-year-old second-growth tree that has grown remarkably fast—it is now larger than and nearly as tall as the oldest tree studied.

“Most of the logging was of the ‘hunt-and-peck’ variety through the 1940s,” Elliott said, “and some selective harvesting was conducted in the mid-1980s. But we’re incredibly excited about the large number of old-growth trees that remain, and the quality of the older second-growth redwoods. Many are quite large, and we’re confident that with protection, they will acquire old-growth characteristics over time.” 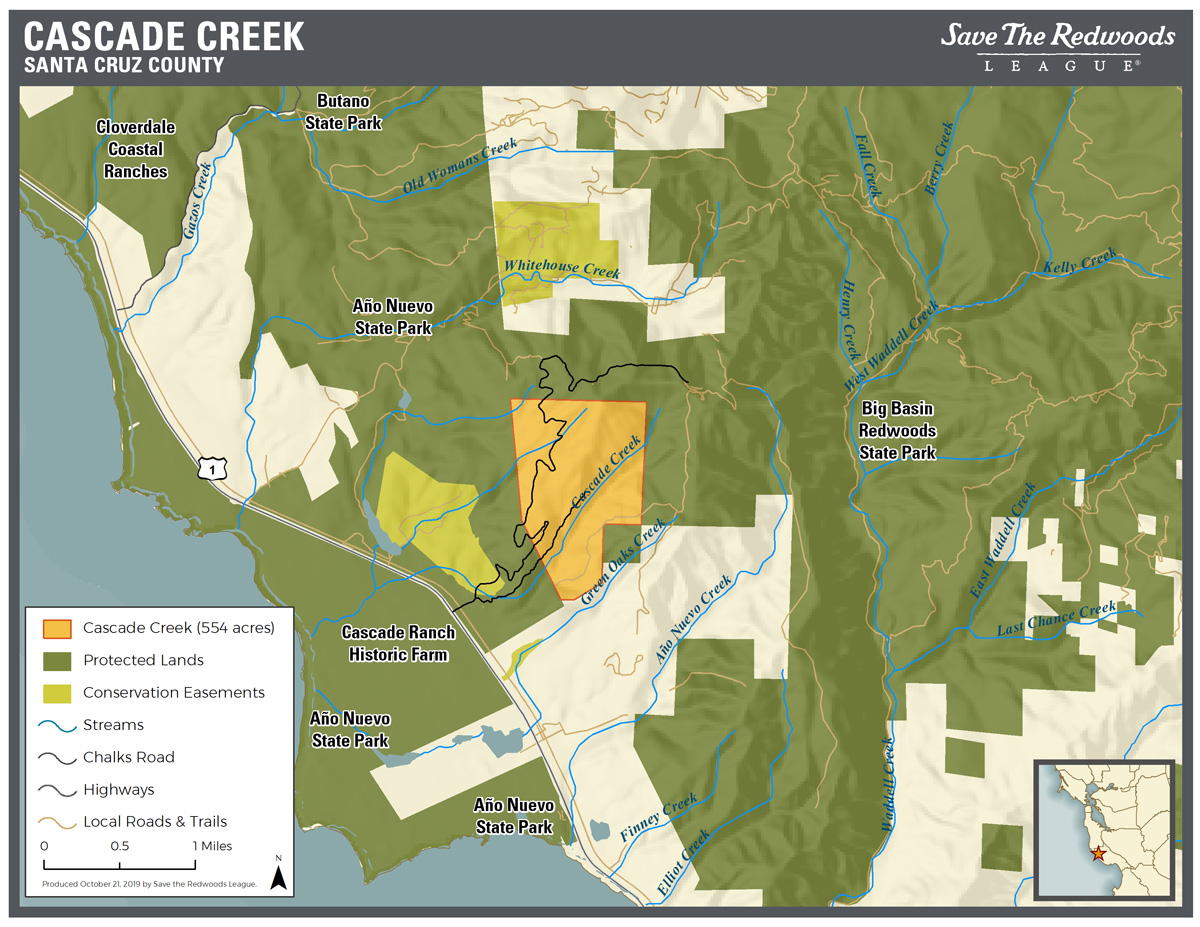 Larry Holmes said, “It’s a piece of property that should be a part of the state parks. We’ve known that for many years. And then when you realize that 95 percent of the old-growth redwoods were cut at one time, it’s very important to us to save the redwood trees.”
Cascade Creek is also remarkable for other natural features. The namesake creek flows down through the forest and over the 50-foot Cascade Falls just south of the property on State Park land. The forest also includes tracts of knobcone pine and hardwood forest. Marbled murrelets have been spotted in the area, and it’s likely the property’s ancient redwoods provide nesting habitat for these seabirds. The marbled murrelet is listed as threatened under the federal Endangered Species Act and endangered under California’s Endangered Species Act.

Along with protecting an extraordinary natural landscape, the Cascade Creek agreement will have the potential to offer more recreational opportunities for visitors to the Santa Cruz Mountains. In the future, visitors will be able to hike from Año Nuevo State Park (on the inland side of Highway 1) and up into the forest along Cascade Creek. Larry Holmes and his wife Bronia Holmes are pleased by that likelihood.

“The main reasons we want to save this property are for future generations, for my grandchildren, their children, and for the planet,” said Bronia. “It’s a good feeling knowing that it’s going to be forever preserved.”