Sequoiadendron giganteum is the world's most massive tree.

The Most Massive Trees

Being dwarfed by Earth’s most massive tree, the giant sequoia, fills you with wonder. It’s hard to believe that a living thing can be so enormous and old. Also known as Sierra redwoods, the largest of these trees that live in California’s rugged Sierra Nevada mountain range, could hold a stadium full of people.

Redwoods once grew throughout the Northern Hemisphere. The oldest known redwood fossils date back more than 200 million years to the Jurassic period. Today, the last giant sequoia on Earth live on land about the size of Cleveland (48,000 acres), in about 73 groves scattered along the western slopes of the Sierra Nevada. The northernmost sequoia grow in Placer County in Tahoe National Forest, and the southernmost groves live in Giant Sequoia National Monument. The first widely publicized discovery of the giant sequoia was in 1852, at Calaveras Big Trees State Park. One of these trees, named the Discovery Tree, was unfortunately felled in 1853. It was determined to be 1,244 years old. Its stump was so large it was used as a dance floor.

Some sequoia groves were logged in the late 1800s and early 1900s, but not very successfully. The trees would often shatter when they hit the ground because of their brittleness and great weight. The leftover wood was used mainly for shingles and fence posts, or even for matchsticks, and therefore had little monetary value. Once Sequoia National Park was established, tourism brought a better incentive to protect the trees.

Some of the largest surviving giant sequoia groves can be seen in Sequoia and Kings Canyon National Parks, Giant Sequoia National Monument, Calaveras Big Trees State Park and Yosemite National Park. Sequoia are found at elevations of 1,400–2,150 meters (4,600–7,050 feet) and can live to be 3,000 years old!

Giant sequoia grow so large because they live a very long time and grow quickly. To thrive, giant sequoia require a great amount of water, which they primarily receive from the Sierra snowpack that accumulates over the winter months and soaks into the ground when it melts. Because they need well-drained soil, walking around the base of giant sequoia can cause them harm, as it compacts the soil around their shallow roots and prevents the trees from getting enough water.

Giant sequoia are generally well able to protect themselves against their natural threats, allowing them to survive for thousands of years. They are too massive to be blown over in the wind, and their bark is thick and rich in tannins, which protect them against fire and insect damage. Fire is an important element of the giant sequoia forest. Sequoia seedlings need nutrient-rich soil, lots of sunlight, and an area free of competition from other plants to thrive. Periodic wildfires help to produce all of these conditions and are therefore very beneficial to the reproduction of sequoia trees. Fire suppression policies in recent years have increased the growth of dense, brushy undergrowth and reduced the likelihood of giant sequoia regeneration. You can learn more about the impacts of fire on our redwood and sequoia forests through our blog. 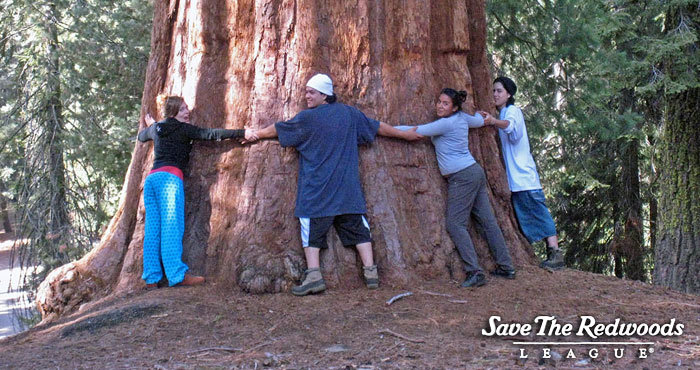 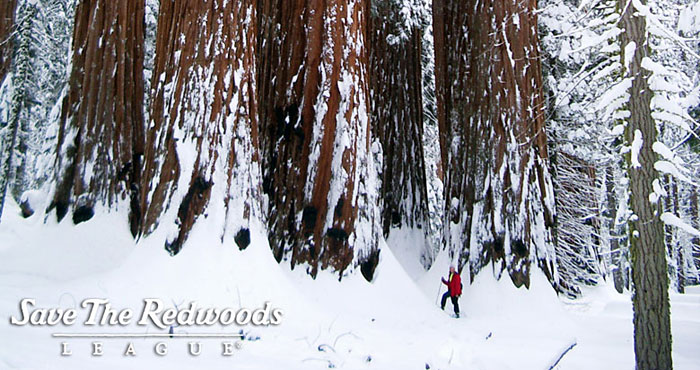 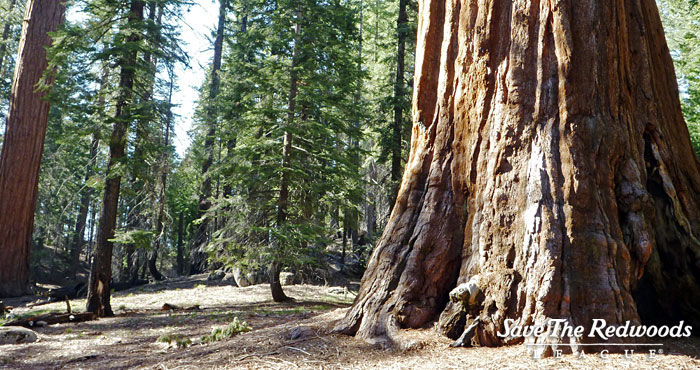 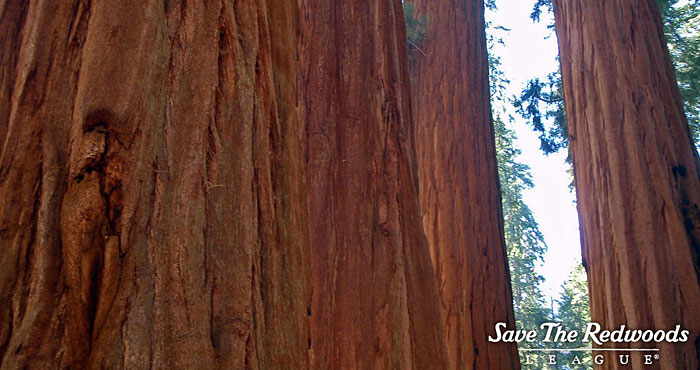 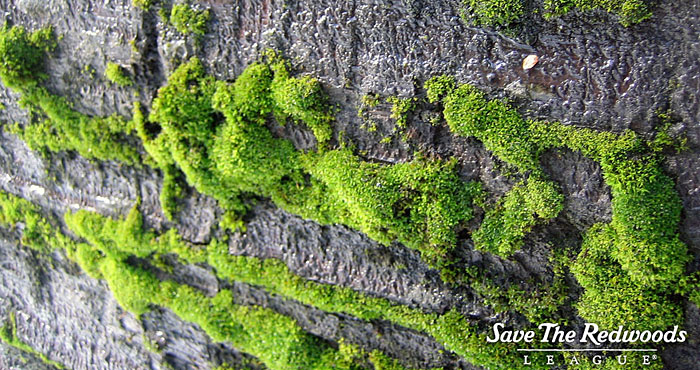 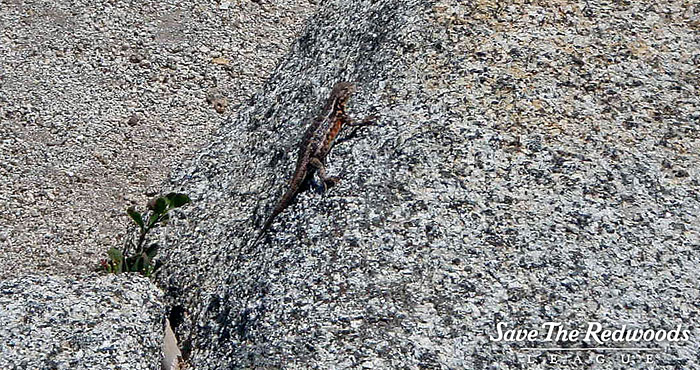 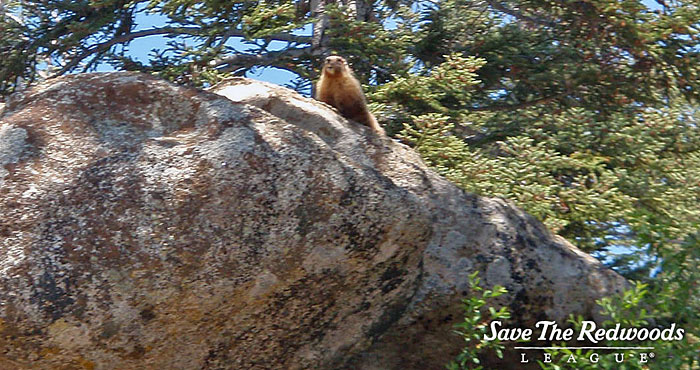 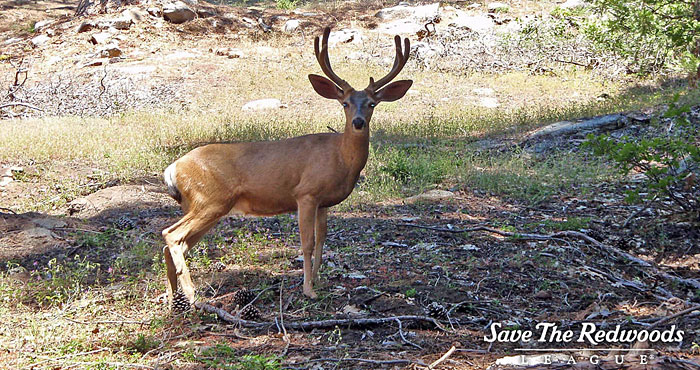 Since 1918, Save the Redwoods League has been working to protect, restore and connect people to our remaining redwood forests. We have helped protect redwood forests and surrounding land totaling more than 200,000 acres (about the size of New York City). Our conservation work depends on close partnerships with scientists, land managers, industries and other land conservation organizations. We’re the only organization with the type of comprehensive approach needed to ensure that forests that take one thousand years to grow will be here for another thousand years.

You can learn more about our conservation work by visiting our protect and restore pages.

John Muir, renowned naturalist and extensive explorer of the Sierra Nevada, was in awe of these giants. “There is something wonderfully attractive in this king tree, even when beheld from afar, that draws us to it with indescribable enthusiasm; its superior height and massive smoothly rounded outlines proclaiming its character in any company; and when one of the oldest attains full stature on some commanding ridge it seems the very god of the woods.”

To help protect giant sequoia forests, we must study them. There is still so much we do not know about these enormous giants and their surrounding forests. Through our Research Grants Program we have learned that:

You can read more about League-funded research projects on our research grants page.

To meet the pressing need for research on how redwoods can survive sweeping environmental changes, the League and redwoods scientists launched the multiyear Redwoods and Climate Change Initiative. Our goal is to create a comprehensive climate adaptation strategy for the redwoods. These findings will help focus League efforts on where to protect and restore redwood forestland according to climate change forecasts.

Working on scales from leaves to landscapes, no other team of investigators in the world has the unique and complementary skills to conduct this integrated 10-year investigation of redwoods. The investigation includes a network of forest plots that can be monitored for more than 100 years. This program will yield data-based solutions to protect redwoods in a changing world. Read about our initial results on our Understanding Climate Change pages.

Check out our free resources that will help you plan your trips and learn more about the forests. You’ll find an interactive trip planning tool, redwood forest guides, events and a live webcam.

Today, it takes a community including private landowners, parks, local communities, scientists and our supporters, to safeguard redwood forests. Together, we protect redwood forests from threats such as unsustainable development; restore the forests we have lost; and connect people to these towering wonders of nature. With your help, we can leave the forests — and the world — in a better place than we found them.