by Save the Redwoods League on September 9, 2011

Save the Redwoods League awarded 34 grants to nonprofit organizations to foster a deeper understanding of redwood forests through personal visits and educational experiences among diverse groups of adults and children. Learn more about these grants. 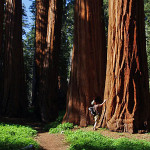 Have You Renewed Your Membership?

by Save the Redwoods League on November 4, 2011

With our members’ generous support, Save the Redwoods League achieved many successes in 2011, including purchase of the ancient Noyo River Redwoods and one of the last pieces of privately held land in Redwood National Park. You are at the heart of that success. Please renew your League membership or join today. You’ll enjoy the immense satisfaction of knowing that you’re helping to safeguard the redwoods, a world treasure. Thank you.