Three Rivers, Calif. (February 17, 2016) — Save the Redwoods League and Sequoia Riverlands Trust (SRT) announced today the donation of the 66-acre Craig Ranch in Tulare County to the Bureau of Land Management (BLM), providing access to a popular area for recreationists.

The property, located southeast of the town of Three Rivers and previously owned by the Ollie Craig Trust, will help protect wildlife habitat and will serve as a gateway to a grove of giant sequoias by improving access to public lands at adjoining Case Mountain, part of the Sierra Nevada.

“Craig Ranch presents an incredible opportunity to enhance conservation and outdoor recreation on surrounding public lands,” said Save the Redwoods League Chief Program Officer Paul Ringgold. “It’s truly a privilege to help people connect with these special places and now, through this partnership, Case Mountain’s giant sequoias are within their reach at last.”

“Sequoia Riverlands Trust conceived and shepherded this project over many years, bringing the various parties together,” said Hilary Dustin, SRT conservation director. “We could not have done so without the vision and determination of Dale Lincoln, who is among our most ardent donors and the main private sponsor of SRT’s efforts to conserve Craig Ranch. The Sierra Nevada Conservancy also provided invaluable support.”

The donated lands are adjacent to Kaweah Area of Critical Environmental Concern (ACEC) and will be added to the Case Mountain Extensive Recreation Management Area (ERMA), a popular recreation destination. Case Mountain, a portion of the ACEC that includes stands of ancient giant sequoias, will soon have better parking and trailhead access to the adjacent public lands.

“This action has been years in the making and we want to thank our partners who made it possible,” said the BLM Bakersfield Field Office Manager Gabe Garcia. “With this donation we will be able to provide recreational users a better overall experience and give the public the opportunity to see one of the most unique areas in the nation.”

In 1993, Ollie Craig sold 1,000 acres to the BLM, now part of the Case Mountain Extensive Recreation Management Area and the Kaweah Area of Critical Environmental Concern. The additional 66 acres acquired from Save the Redwoods League expand Mrs. Craig’s considerable conservation legacy and honor her desire to conserve public lands. 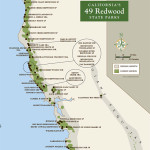 The spectacular #LostCoast hiking trail, the longest roadless stretch of land in 48 contiguous states, will grow by 2.3 miles to 60 miles at its southern end in Mendocino County when new the Peter Douglas trail opens. Douglas was the former Executive Director of the California Coastal Commission for 26 years and co-authored the Coastal Act. This year is the 40th anniversary of the California Coastal Act of 1976.