Celebrate the beauty and sweeping history of California state parks by watching the documentary, California Forever, The Story of California State Parks, in September 2012 on PBS stations and special screenings. The film features redwoods and the League. See the trailer. 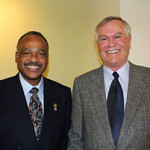 Save the Redwoods League and California State Parks have worked together to protect parklands for some 90 years. So it’s not too surprising that the new California State Parks Director, Major General Anthony L. Jackson, USMC (Ret.), lunched with the Save the Redwoods League Council on his third week on the job. In our exclusive profile, he said he’s committed to preserving the state’s natural resources. These resources include the redwood forests, in which you have invested through your generous League gifts.