ARNOLD, Calif. (January 31, 2018) — Marking one year since the famous Pioneer Cabin Tunnel Tree toppled, California State Parks, Save the Redwoods League and Humboldt State University today announced plans to use the fallen sequoia to study the tree’s life history and gather historic climate-related information for the surrounding area. The information will help California State Parks better manage the existing groves of redwood trees. The giant sequoia is the largest tree species in the world, with some trees reaching a diameter of 36 feet.

Located within Calaveras Big Trees State Park within a relatively large sequoia grove containing more than 150 specimens estimated to be 2,000 years old, the Pioneer Cabin Tree was one of California’s oldest tourist attractions and a beloved specimen of a rare California native species. A combination of trunk and root decay and storm water runoff appears to have brought the giant sequoia down at its base on January 8, 2017, shattering it and a nearby cedar tree. The Pioneer Cabin Tree stood approximately 205 feet tall and was more than 19 feet in diameter (measured six feet from the ground).

Since the tree fell last year, California State Parks has worked with Save the Redwoods League and Humboldt State University Dendrochronologist Allyson Carroll, a scientist who studies tree rings to comprehend past events, to create a plan to study the tree. The first step in the study of the sequoia involved removing approximately a 7 ½’ by 3 ½’ piece of the tree using a large saw. The section took about ten hours to remove and was then relocated to a warm and dry building within the park. The specimen will take at least six months to dry. Once drying is complete, Save the Redwoods League will sand and prepare the piece for Dendrochronologist Carroll to begin her study of the tree’s rings.

“This iconic ‘tunnel tree’-thousands of years old when it died-has one more story to tell, and it’s all about the dynamic environment that it has occupied throughout its long life,” said Paul Ringgold, Chief Program Officer at Save the Redwoods League. “With the last remaining giant sequoia living in small, scattered groves along California’s Sierra Nevada, it’s important for us to know as much as we can about their life history, so we can all better protect these ancient giants.”

After Carroll has collected and recorded all information, the removed portion of the tree will remain in the park as part of an interpretive display that State Parks and the League will collaboratively design, where its history can live on.

About the Famous Giant Sequoias

The Pioneer Cabin Tree was one of the last of the historic tunnel trees in the Sierra. This giant sequoia fell in January 2017 after a series of heavy storms. The Palace Hotel Tree and Smith Cabin Tree remain standing in the more remote South Grove Nature Preserve at Calaveras Big Trees State Park. The California Tree in Yosemite’s Mariposa Grove of Giant Sequoias and three coast redwood tunnel trees in northwestern California are other storied sequoias in public parks.

Subscribe to California State Parks News via e-mail at info@parks.ca.gov or via RSS feed (external link).

Subscribe to Save the Redwoods League email to receive the most up-to-date news.

Save the Redwoods League
One of the nation’s oldest conservation organizations, Save the Redwoods League has been protecting and restoring redwood forests since 1918, connecting generations of visitors with the beauty and serenity of the redwood forest. Our 17,000 supporters have enabled the League to protect more than 200,000 acres of irreplaceable forests in 66 state, national and local parks and reserves. For more information, go to SaveTheRedwoods.org.

California Department of Parks and Recreation
The California Department of Parks and Recreation provides for the health, inspiration and education of the people of California by helping to preserve the state’s extraordinary biological diversity, protecting its most valued natural and cultural resources, and creating opportunities for high-quality outdoor recreation. Off-highway motor vehicle recreation, boating activities, horseback riding, on- and off-road cycling, hiking, camping, and rock climbing are some of the recreational activities enjoyed in 280 state parks organized into 22 field districts throughout the state. Visit us at parks.ca.gov. 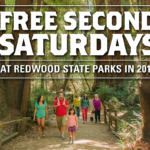 To celebrate 100 years of saving California’s iconic redwood forest, Save the Redwoods League and California State Parks are offering free day-use admission to more than 40 redwood state parks on the second Saturday of each month in 2018. 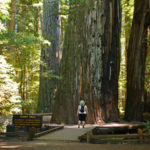 by Save the Redwoods League on February 5, 2018

Lonely Planet named California’s Redwood Coast the number one destination in the country to visit in 2018. Since a good trip to the redwoods often begins with the planning, Save the Redwoods League has launched ExploreRedwoods.org.