Oakland, CA (December 17, 2018) – The East Bay Regional Park District and Save the Redwoods League unveiled the Old Growth Redwood Heritage Viewing Deck and Interpretive Exhibit at Roberts Regional Recreation Area this past Saturday, celebrating its dedication with redwood lovers from around the Bay Area. The exhibit, found along Roberts Ridge Trail, preserves and protects a remaining 18-foot diameter old-growth coast redwood footprint for nature learning and includes a 570-square-foot observation deck with interpretive panels. The exhibit is free and open to the public 365 days a year.

“These towering, majestic coast redwoods are one of the greatest natural treasures in the East Bay,” said East Bay Regional Park District General Manager Robert Doyle. “For years, the East Bay Regional Park District has been working in partnership with the Save the Redwoods League to protect these magnificent trees and pay homage to their past through conservation and education.”

“The new exhibit protects the old-growth footprint for future generations and allows for expanded educational programs on redwoods and climate change,” added Doyle.

Redwoods are an important part of the entire Bay Area’s history. From the early 1800s to mid-1800s a group of especially tall redwood trees known as the “Navigation Trees” served as landmarks that helped ships avoid underwater hazards and guided them safely through the San Francisco Bay. The Navigation Trees are no longer alive today but leave an everlasting legacy in the Bay Area. Nearly all old-growth redwoods in the East Bay were cut down by 1860 to construct homes and buildings.

“This new exhibit sparks the imagination, giving park visitors a glimpse into the forest of massive, ancient coast redwoods that once thrived in the East Bay,” said League President and CEO Sam Hodder. “We’re honored to unveil this exhibit to teach park visitors about the tallest trees in the world that once towered from these hills—and how they’re growing back as we speak.”

The giant redwood footprint has been a literal hidden gem at Roberts Regional Recreation Area for more than a century with limited opportunities to learn about its history and past.

About Save the Redwoods League, one of the nation’s oldest conservation organizations, is celebrating 100 years of protecting and restoring coast redwood and giant sequoia forests and connecting generations of visitors with their peace and beauty. Its 20,000 supporters have enabled the League to protect more than 200,000 acres of irreplaceable forest and help create 66 redwood parks and reserves. For more information, visit SaveTheRedwoods.org.

About East Bay Regional Park District
The East Bay Regional Park District is a system of beautiful public parks and trails in Alameda and Contra Costa counties east of San Francisco Bay, established in 1934. The system comprises 121,000 acres in 73 parks including over1,250 miles of trails for hiking, biking, horseback riding, and nature learning. 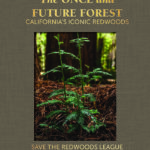 The Once and Future Forest: California’s Iconic Redwoods

In commemoration of the 100th anniversary of Save the Redwoods League, Heyday is proud to present The Once and Future Forest: California’s Iconic Redwoods, a stunning book that showcases both the grandeur of the redwood ecosystems that sustain California and the deep love they have engendered in scientists, writers, artists and the general public. – Save the Redwoods League, one of America’s first conservation organizations, announced the hiring of two new key staff positions, Becky Bremser as Director of Land Protection and Jessica Carter as Director of Parks and Public Engagement.