San Francisco, Calif. (Oct. 26, 2022) — Save the Redwoods League and the USDA Forest Service have signed a partnership agreement to accelerate stewardship activities in the threatened giant sequoia range. Under this stewardship agreement, the League will lead restoration efforts to reduce the wildfire risk in two giant sequoia groves in partnership with the Forest Service. One of the groves is among the 12 cited in the Forest Service “emergency action” announced in July 2022.

The League will work to restore the two groves within the Forest Service-managed Giant Sequoia National Monument. While both groves burned in the 2021 Windy Fire, large portions of them continue to be vulnerable to climate-driven wildfires. The 568-acre Long Meadow Grove is home to the famed Trail of 100 Giants, the most popular trail within the National Monument. The nearby 533-acre Packsaddle Grove is one of the southernmost groves within the National Monument, making it particularly vulnerable in a warmer and drier climate. The agreement allows for the League to partner with the Forest Service on stewardship of additional groves over a 10-year period.

The League’s work in the two groves will begin on Oct. 31 and continue until the work is completed, which the League estimates will be by 2025. The goal of the work is to protect remaining ancient giant sequoia trees, reduce the potential for future high-severity wildfires, restore a natural fire regime through the reintroduction of prescribed burning and promote forest health and resiliency in the face of climate change. The work will be conducted in accordance with the Forest Service Giant Sequoia National Monument Management Plan.

“Following the intense wildfires that have killed nearly 20% of the mighty giant sequoias in the last several years, there is a tremendous urgency to treat the remaining forests while we still can,” said Sam Hodder, president and CEO of Save the Redwoods League. “We are eager to put the League’s scientific and restoration expertise into action to accelerate the pace and scale of restoration. There is no time to waste.”

To implement this restoration project, the League is engaging a local contractor and Indigenous forestry crews from CHIPS, a nonprofit organization based in Calaveras County. More than 80% of the organization’s forestry crews are staffed by members of multiple tribes from the Sierra Nevada region. Save the Redwoods League is committed to partnering with California Native tribes in its work to protect and restore the giant sequoia and redwood forests.

“The 2020 Castle Fire was a dramatic wake-up call highlighting the vulnerability of this unique system, in that an unprecedented number of giant sequoias were killed. These fire effects are extreme and, if not prevented in future wildfires, represent a significant threat to giant sequoia survival across their already limited range,” explained Teresa Benson, Sequoia National Forest supervisor. “We look forward to working with Save the Redwoods League in this and future restoration efforts to protect our beloved giant sequoias.”

Save the Redwoods League and the USDA Forest Service are both members of the Giant Sequoia Lands Coalition, which was formed in 2021 to coordinate and catalyze the work to restore fire resilience to the giant sequoia forests across the agencies and nonprofits responsible for their stewardship. This agreement is one outcome of those efforts, along with many other actions underway by multiple Coalition partners.

One of the nation’s longest-running conservation organizations, Save the Redwoods League has been protecting and restoring redwood forests since 1918. The League has connected generations of visitors with the beauty and serenity of the redwood forest. Our 240,000 supporters have enabled the League to protect more than 220,000 acres of irreplaceable forests in 66 state, national and local parks and reserves. For information, please visit SaveTheRedwoods.org. 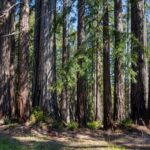 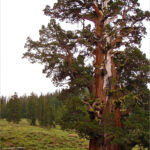 Save the Redwoods League Donates One of the Oldest Trees in the World, Bennett Juniper, to Mother Lode Land Trust

by Save the Redwoods League on November 8, 2022

Save the Redwoods League today announced that it has entrusted Mother Lode Land Trust (MLLT) with the long-term stewardship of Bennett Juniper, the largest juniper and one of the oldest known trees in the world. The League donated the 3,000-year-old tree and surrounding 3-acre property to MLLT. The Bennett Juniper property has been stewarded by the League since 1987.