When Hendy Woods State Park faced closure in 2011 because of California State Parks budget cuts, Kathy Bailey said she knew she had to get involved. So she co-founded Hendy Woods Community, which, with Save the Redwoods League, helped keep the park open for all to enjoy.

Learn more about this conservation veteran


The League in the News 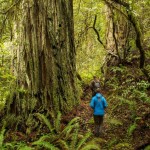 Your generous donations are restoring habitat for wildlife and speeding development of tomorrow’s beautiful old-growth groves at Headwaters Forest, the reserve established in 1999 after a long and contentious dispute over the logging of its ancient coast redwood forest.

See the video and story, and learn how you can help more.