It can be a long, winding, and even stressful drive to Stout Grove in Jedediah Smith Redwoods State Park at the northernmost tip of California. But it only takes moments to be completely at peace here. Step into this cathedral-like stand, and you’ll gaze upon immense redwood columns rising to a canopy that filters the sunlight. A thick carpet of needles and ferns traps every sound, creating remarkable silence.

The good news is that the redwood forest in Jed Smith and other parks has been protected. The bad news is that ancient redwoods stand at a new crossroads of environmental change where urbanization, habitat fragmentation, pollution, invasive species and climatic changes threaten them in ways they have not yet experienced in their long history on Earth.

More than 144 million years ago, amid the dinosaurs, redwoods’ ancestors flourished across the globe. In response to an ever-changing climate, they retreated from the vast majority of their range. Now, throughout the current coast redwood range, we are experiencing temperature increases and less coastal fog. In the Sierra Nevada, the snowpack on which giant sequoias depend has decreased, and snow is melting earlier.

Climate change will interact with many other stressors that the redwoods had not experienced before the Industrial Revolution. When gold was discovered in California in 1849, the hundreds of thousands of people who rushed to the state needed buildings, and redwoods were logged extensively to meet the demand. By the 1960s, only a small fraction of the original 2 million acres of ancient coast redwood forest remained. In addition to this extensive logging, humans introduced other stressors to the redwood forest, including invasive species, fire suppression, air pollution and habitat fragmentation.

Today, redwoods stand at a critical point. The current and projected interactions of these stressors jeopardize more than 90 years of League conservation work. We must act today to protect redwoods from these threats in the future.

You can help scientists research the effects of climate change on redwood forests by taking photos for our free Redwood Watch project.

Just find a redwood tree in a park, in your own backyard, or in a botanical garden around the world. Use the Redwood Watch application powered by iNaturalist or your own camera to take a photo of the tree and submit it online.

Get the iPhone app by clicking on the App Store button on your iPhone, then click on the search button and type “Redwood Watch.” Watch our online tutorial to learn how to use the Redwood Watch iPhone application.

“We’re looking to see impacts at the ranges’ edges,” said Richard Campbell, League Conservation Science Manager. “These impacts likely will be evident in trees that are beginning to die from the tips of their leaves backward. We also can see the impacts when new trees grow.”

We don’t yet know how climate change will impact the redwood forest, but your photos can help us understand where redwoods grow well today, so we will be better able to predict where the redwood forests of tomorrow will thrive. 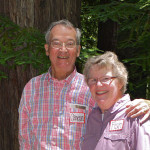 Valentine’s Day: From the Ultimate Gift to New Ecards

by Save the Redwoods League on February 1, 2013

You may celebrate Valentine’s Day with chocolates or a bouquet of red roses. But Piedmont, California, attorney Cameron Wolfe gave his wife Fran something much bigger: He worked with Save the Redwoods League to dedicate the Fran B. Wolfe Redwood Grove in Pfeiffer Big Sur State Park. 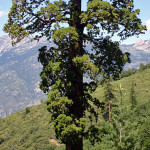 Being dwarfed by Earth’s most massive tree, the giant sequoia, fills you with wonder. It’s hard to believe that a living thing can be so enormous and old. It may be alarming to see these forests on fire, but research funded by your gifts shows that disturbances such as these are actually good for giant sequoias. See why.