Last month, I explained the nuts and bolts of conservation easements, a super important tool in land conservation and one that we at Save the Redwoods League use often. This month, you can learn about what happens next: monitoring and … Continued 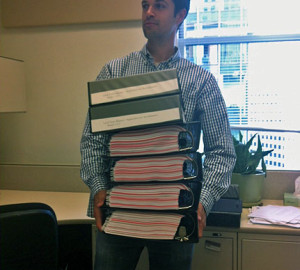 Today’s quiz: A.  What is Anthony, League Conservation Programs Assistant, carrying? B.  How many redwoods were cut down to generate that amount of paper? C.  Why does Anthony have that look on his face? Answers: A.  Those binders contain the … Continued