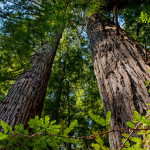 A News Story About the Redwoods

This is much more than a news story. View Slideshow ×Close Giant Sequoias Close