by Dana Poblete on March 23, 2017
Forest geneticist Dr. William J. Libby, a longtime volunteer leader for Save the Redwoods League, recalls the night in 1951 when he chose the path for his life’s work. He was serving the US Forest Service as firefighter in Idaho.

“My ranger asked me what I was planning to do with my life. I was enrolled in a forestry school and was having trouble deciding whether to go into genetics or continue in forestry. With one sentence, he focused my life; he said, ‘Well, trees have genes, don’t they?’”

Now living in Orinda, California, Professor Libby and his students went on to conduct pioneering research on the genetic architectures of the giant sequoia and coast redwood, which got him an invitation to join the Save the Redwoods League’s Board of Councilors in 1990. After 26 years of service, including nine years on the Board of Directors, he transitioned to the role of Honorary Councilor on March 23, 2017.

His League achievements include leading the committee that awards grants for scientific research, and serving as an advisor for the League’s Redwoods and Climate Change Initiative. While adding to general knowledge of coast redwood and sequoia, the RCCI studies the impacts of climate change on redwood and sequoia growth, on their carbon storage and the several different ecosystems dominated by these two keystone species.

A cherished memory of his League tenure, among many, is traveling to a remote part of China in 1999 to retrace the 1948 footsteps of Ralph Chaney, a former League president and the first Westerner to see a live dawn redwood. “For Professor Chaney to be the first Western scientist to visit and observe a living population of the third redwood species with its associated ‘fossil ecosystem,’ which had been known only by its fossils and which we thought had been extinct for over a million years — that caused quite a stir,” he said.

As for the future of redwood forests, Libby hopes to explore ways to establish genetically diverse groves of these three redwood species in other parts of the world so that people can there experience the feelings of awe, peace and well-being that the current ancient native groves inspire.

And in case of existential catastrophes resulting from such things as rapid climate change, large-asteroid collision, or hemispheric use of nuclear weapons, he suggests that having remote colonizing populations in many places on Earth could protect the redwoods from near-future extinction. “There are a few places on Earth where we already have substantial redwood plantations,” he said. “One of my favorites is Long Mile Grove in Rotorua, New Zealand, now 117 years old and, with an understory of 40-foot tree ferns, incredibly impressive and beautiful.”

League President Sam Hodder said Libby has served the League with distinction. “We’re so grateful for Bill’s exemplary service,” Hodder said. “His influence will shape our efforts for years to come.”

One Response to “Bill Libby: League Honors a Scientist and Leader” 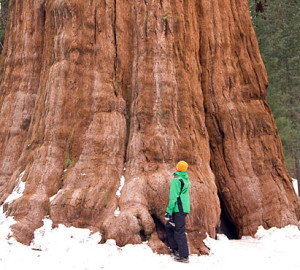 Redwood Perspective: Protecting The Land That Makes Us Feel Humble