To Natalie Oberman, the ancient redwood forest is otherworldly. “It’s hard to grasp the size and age of the trees, the uniqueness of the ecosystem,” she said, as she restored part of the fire-damaged River Trail in Humboldt Redwoods State Park last summer.

She was part of The Student Conservation Association (SCA) crew that worked on the trail, thanks to gifts to Save the Redwoods League from The Garden Club of America (GCA).

Oberman is part of the community of scientists, land managers, volunteers and members like you who care for redwood forests today.

For many participants like Oberman, the SCA offers a brief, physically challenging and exciting interlude in an otherwise sedentary career arc.

“It’s funny, but I’ve discovered that I really like hard, outdoor labor,” says the 24-year-old graduate of the College of Environmental Science and Forestry at the State University of New York at Syracuse. “I may go back for a graduate degree, or work as a researcher. But now, I just love doing what I’m doing.”

“I just want to be outdoors, so I’ve enjoyed it all,” she said. “There’s no other place like the redwood forest on Earth, and working here has been a real privilege.” On October 14th last year, a wildfire burned four acres of coast redwood forest at Roy’s Redwoods Preserve in Western Marin. Despite this fire blazing after many cumulative months of dry weather, fire fighters quickly contained the burn and only … Continued 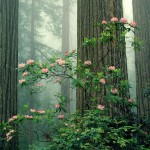 Studying Cycles in Nature — And How You Can Help!

The Bay Area is a pretty amazing place to live, but one complaint I often hear is about the lack of seasons. We never really get cold, snowy winters, or cool, crisp falls with vibrant leaf colors to take our … Continued