My fascination with ferns started with an appreciation of their beauty and eventually translated into a scientific curiosity about how these seemingly delicate plants handle drought. As a postdoc at U.C. Santa Cruz, I looked into the basis of drought tolerance in native coast redwood forest ferns and found both beauty at the fern cellular level and insight into these plants’ drought tolerance. It turns out that I’m late in recognizing the value of fern fronds, as Native Americans have been using ferns to create spectacular baskets for generations.

Inside each fern frond runs thin strands of piping (fern nerds like me refer to these as vascular bundles) that transport water through the fern leaves and strengthen the fronds. Made up of cells very similar to the cells found in the wood of redwood, the vascular bundles are tough and help the plant handle dry conditions when water is scarce and under tension in the frond. In the cross-section photo of Woodwardia fimbriata (giant chain fern), you can see these vascular bundles shaped like kidney beans and the water-conducting cells within them.

Many Native Americans tribes in the coast redwood region use ferns in their traditional basket-making. The Karuk, whose ancestral territory spans the Klamath River region northwards into Southern Oregon, pulled out fern vascular bundles from Woodwardia fronds, dyed them red with alder bark, and used these fern strands to add intricate designs into their baskets. They used many other sources of locally-available plants as well, including the black stem-like stipes of maidenhair fern. 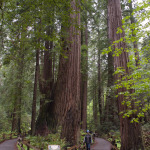 Obama Calls for Action on LWCF

In his weekly radio address on Saturday, the President issued a call to action on the Land and Water Conservation Fund (LWCF). Please, join the President, the League, and others across the country in encouraging LWCF renewal. 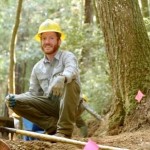 Birds are Imfeld’s passion — and could ultimately become his profession. A graduate of Xavier University, he will soon begin his PhD studies in ecology, evolution and behavior at the University of Minnesota at St. Paul.