by Emily Burns on November 20, 2015
Often during the night I wake to hear the distinctive sound of my neighborhood’s Great Horned Owl calling out. It’s a lovely deep call that sounds like, “hoo-HOO-hoo-hoo” and while I’ve heard it often, I only first laid eyes on the bird last week.

I rose early for a predawn run and once outside my house, I heard the owl calling from somewhere nearby. I peered frantically around in the dark (like a true bird enthusiast) hoping for a glimpse until I spotted it. This magnificent bird was perched atop the tallest coast redwood on the street. It was outlined against the lightening sky and I managed to snap a photo of it – one that certainly won’t win any photography contests but one that does document a phenomenon that I’ve been fascinated by for years.

Redwood treetops grow measurably skyward every year, except when a bird aggressively uses the top as a perch and eventually snaps the tip off. Birds are known to at least temporarily limit the height of even the tallest coast redwoods from time to time. I’m going to keep a watchful eye on this redwood treetop in hopes to see the owl again, but also to see if this bird prunes this vigorous redwood from above.

Take a moment to watch for wildlife among the redwoods on our Redwood Cam (Redwood Cam link) that shows the Smith River and Jedediah Smith Redwoods State Park. 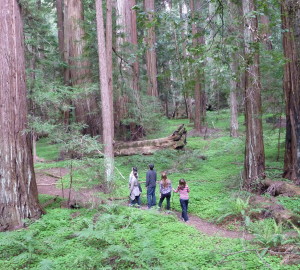 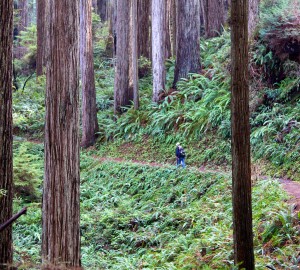 Opt Outside Today — Into the Redwoods!