by Save the Redwoods League on February 14, 2019
Celebrate our redwood forests and play a fun matchmaking game to learn more about some of the redwood forest’s unlikely—but enduring—loves.
Play our Forest Matchmaker game!

Sure, there’s a major height difference here, but it’s no mystery what these two see in each other! The banana slug and coast redwood look out for each other. Slugs eat plant species that compete with redwoods for light, water, and nutrients—and the redwoods offer a cool, moist habitat in exchange. 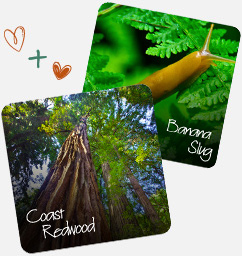 While the fog can be fickle at times, the redwoods don’t mind waiting for it to drift in off the ocean. Especially during those dry summer months, the fog offers something the redwood craves: cool water and fertilizing nitrogen.

The snow plant can be a little zany—described as “psychedelic red asparagus” and “the tree from Mars”—but the giant sequoia loves how it adds to the habitat’s biodiversity. Unable to photosynthesize and produce its own food, the snow plant blossoms in the shadow of the giant sequoia, feeding on fungi in the soil and receiving sugars it needs to survive. The marbled murrelet can play a bit hard to get, but the coast redwood doesn’t mind an elusive sea bird. Rather than building nests, the bird lays its egg directly on a large, moss-covered branch of an old-growth redwood. The marbled murrelet is an endangered species in California, and its nesting site is under strict protection. 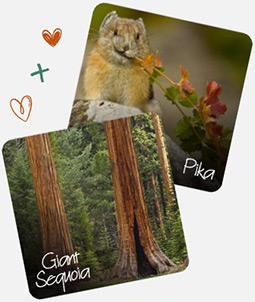 Some of these duos might seem like “odd couples,” but when cupid’s arrow strikes in the redwood forest, bonds are formed that last millennia. And there’s room for you and your love for the forest here, too…

We’re grateful that you’ve found love in your heart for the forest. Share this game with your friends, and get them playing matchmaker, too!

Valentine’s Day and the Redwoods