Big Trees in the News This week, Nate Stephenson and his colleagues published a new study showing that 97% of tree species grow faster as they age. Unlike in animals whose growth clearly plateaus with maturity, older trees just keep getting bigger and bigger. Large trees have more leaves for photosynthesis than small trees and they convert that green energy into higher rates of wood production.

Thanks to the research of Stephen Sillett and his colleagues, we’ve know this was true in redwoods for several years but we didn’t know how widespread this phenomenon was.  We are really lucky that this growth pattern is common in large trees around the world because these behemoths are pulling incredible amounts of carbon dioxide out of the atmosphere as they grow and storing this greenhouse gas tree in tree trunks, branches and roots.

Old, large trees have never been more important on the planet in light of climate change. Let’s keep protecting our old forests and restoring the young forests, so the young trees of today can grow to their full potential.

For more on the amazing growth rates of redwoods, read about our recent Redwoods and Climate Change Initiative results here. 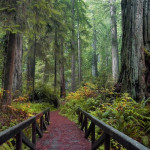 Governor Brown recently announced California’s 2014-2015 budget, and I speak for all of us at the League in applauding the governor’s Parks-related proposals: to provide one-time funding of $14 million for operations and $40 million for backlogged maintenance costs, as well as to keep all parks open and … Continued The view from the picnic table was grand to be sure, the blue infinities of sea and sky meeting where the distant fog gathered offshore (and coastal fog, when you think about it, really is the perfect blend of the … Continued