On October 14th last year, a wildfire burned four acres of coast redwood forest at Roy’s Redwoods Preserve in Western Marin. Despite this fire blazing after many cumulative months of dry weather, fire fighters quickly contained the burn and only a small section of the redwood grove was affected. This week, I hiked through the recently burned stand and saw several fern species emerging as an early sign of forest recovery.

Why do such seemingly delicate ferns bounce back so quickly? On the forest floor, fern stems live safely tucked below ground and often survive moderate fires even if all the fronds are burned away. Once rains come, newly available light to the forest floor and an influx of nutrients released by the fire help ferns grow new fronds.This first few cohort of fern fronds may be much smaller than fronds existing before the fire because fires take a toll on plants’ energy storage. Over the following seasons, I suspect the Roy’s Redwoods ferns will grow in stature as energy reserves are replenished and within a few years signs of fire in the understory will disappear.

Fires can certainly harm and even kill individual plants, but fire is a needed natural element in the redwood forest that gives the next generation of plants room and light to grow, prunes back diseased trees, and recycles nutrients. One of our greatest challenges is figuring out how to keep fires burning responsibly for the good of the forest.

Learn more about the natural frequency of fire on the North Coast here. When California’s state-park crisis hit in 2011, businessman Andrew Vought was shocked to find that Portola Redwoods State Park was slated for closure. “I couldn’t let that happen,” he said. Vought had long enjoyed hiking and camping at the park, … Continued 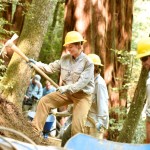 To Natalie Oberman, the ancient redwood forest is otherworldly. “It’s hard to grasp the size and age of the trees, the uniqueness of the ecosystem,” she said, as she restored part of the fire-damaged River Trail in Humboldt Redwoods State … Continued