San Francisco (September 26, 2017) — University of California, Davis, John Hopkins University and Save the Redwoods League today announced an ambitious plan to fully sequence the coast redwood and giant sequoia genomes — for the first time — utilizing conifer genetic sequencing techniques unavailable until now. By the end of this five-year project, the genome sequences and the screening tools developed will allow researchers to quickly assess genetic diversity in redwood forests to inform management plans that restore the health and resilience of these forests throughout their natural ranges as they face environmental stressors such as climate change.

“The League was founded in 1918, and much of our work during our first century focused on protecting coast redwoods and giant sequoia from the ‘timber rush’ and development,” said Sam Hodder, League President and CEO of the League. “At this point, we have protected nearly all of the old-growth groves that remain on Earth, but there’s so much more we can do for the recovering redwood forests that surround and sustain them. Much of our work is now shifting to forest restoration and finding new ways to transform the previously cut-over redwood forests into magnificent old-growth wonderlands. Understanding redwoods at the genetic level will help us continue to protect both species over the coming millennia.”

Initial inquiries by the League confirm that some trees are better at surviving drought, fire, pests and diseases than other trees, according to Emily Burns, the League’s Director of Science and the lead investigator for the genome project. By identifying the genes responsible for these adaptations, scientists can compile a scalable database that will aid resource managers as they plan long-term conservation strategies.

“Every timber harvest, reforestation project and restoration thinning effort has removed trees from the forest that may have had the particular genetic resources that could assure forest resiliency during stressful environmental conditions,” said Burns. “Today, these management decisions are made without understanding their genetic consequences. Our project will remedy that deficit.”

During the course of the project, researchers will produce publicly available genome sequences for both coast redwood and giant sequoia; create a genetic variation database covering the entire genomes of both species; develop genotyping tools that will allow resource managers to identify coast redwood and giant sequoia genetic variation while in the field; compile forest genetic inventories; and launch pilot restoration projects based on the accrued data.

Full sequencing of conifer genomes has only been possible in the last decade, said Burns. In the case of coast redwoods, the research will be especially demanding.

“The coast redwood is hexaploid, meaning it has six sets of large chromosomes, compared to diploid human beings, who have two sets,” Burns said. “The redwood genome is 10 times larger than the human genome. In 2014, Dr. David Neale at the University of California, Davis, Department of Plant Sciences conducted a pilot effort to determine if sequencing the redwood genome is feasible. His work showed that it is indeed possible, and he and his team produced a preliminary sequence for the coast redwood that’s the foundation for our current project.”

“By sequencing a diverse panel of trees, we can discover, identify and compare their Single-nucleotide polymorphism (SNP) differences,” said Neale.

Neale will partner with the League for the project. Computer analyses and assembly of the genomes from field data will be performed at Johns Hopkins University by a team led by Biomedical Engineering, Computer Science and Biostatistics Professor Steven Salzberg, the Director of the university’s Center for Computational Biology and an associate of the McKusick-Nathans Institute of Genetic Medicine.

About Save the Redwoods League
Walk through a redwood forest—home of the tallest, largest, and some of the oldest living beings on Earth—and you can’t help but feel an overwhelming sense of awe and peace among these magnificent giants. Since 1918, Save the Redwoods League has led the effort to protect the coast redwoods and giant sequoias for all to experience and enjoy. To date, the League has completed the purchase of nearly 200,000 acres of redwood forest and associated land. For more information, please visit SaveTheRedwoods.org, or to sign up for monthly updates, please visit SaveTheRedwoods.org/signup. 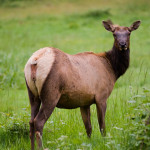