SAN FRANCISCO, CA (August 28, 2014) — The State of California has stepped in to save more than 8,500 acres of redwood forestlands, waterways and wildlife habitat near Silicon Valley from development. In an 2-0 vote, members of the California Wildlife Conservation Board (WCB) granted $10 million to Save the Redwoods League to establish a conservation agreement that will permanently protect San Vicente Redwoods (formerly CEMEX Redwoods). The agreement prohibits subdivision of land and extinguishes all development rights.

Threatened with development and subdivision, San Vicente Redwoods received a reprieve in 2011 when two land trust organizations, Peninsula Open Space Trust (POST) and Sempervirens Fund, purchased the property. However, neither POST nor Sempervirens Fund had the financial resources to hold the property long term. They planned to sell or trade San Vicente Redwoods to permanent steward after securing a conservation easement, a legal agreement that would protect the land forever.

The WCB’s decision to grant $10 million to Save the Redwoods League to complete the conservation easement for San Vicente Redwoods opens the land to public recreation, additional scientific research and educational activities, as well as sustainable timber harvesting on portions of the property. The State of California Coastal Conservancy voted to grant $2 million toward the project in October. POST and Sempervirens Fund will continue to hold the title and manage the property in partnership with the League. The Land Trust of Santa Cruz County is leading the effort to provide future public access to San Vicente Redwoods.

For images or to schedule an interview, please contact one of the individuals listed below. Editors, please note: All principals are in Sacramento at the WCB hearing on August 28.

About the Living Landscape Initiative:
The Living Landscape Initiative is a collaborative effort among five land conservation organizations in and around Silicon Valley. Land Trust of Santa Cruz County, The Nature Conservancy, Peninsula Open Space Trust (POST), Save the Redwoods League and Sempervirens Fund are all working together to protect the unique natural benefits and striking beauty that nourish the area’s social and economic vitality. By creating a sustainable living landscape, the Initiative seeks to enhance our lives by promoting clean air and water, local farming and working lands, biodiversity and habitat protection for wildlife, and public enjoyment of natural lands. To learn more, visit www.livinglandscapeinitiative.org. Major General Anthony Jackson brought great energy and leadership to California State Parks. We at the League wish him all the best! 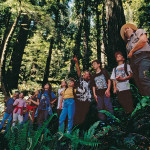 The League has awarded over $106,000 to 24 schools, parks and educational organizations to help students get outdoors for enriching and educational experiences among the redwoods. Grant winners are located throughout Northern California, from Oakland’s Chabot Space and Science Center serving low-income youth, to Santa Cruz’s Every Child Outdoors Science School and Mendocino Area Parks Association’s field trip program. View and download the full press release.