Tell Congress You Support Funding for Land and Water Conservation Many of the most magnificent redwood parks and reserves you and generations of Americans have enjoyed, including Redwood National Park pictured above, have been partially funded by the Land and Water Conservation Fund. Photo by David Baselt, redwoodhikes.com

Your voice can help secure federal funding to help protect America’s iconic landscapes, including some of the most magnificent redwood forests you’ve helped safeguard through Save the Redwoods League. Please contact Congress by using the widget below.

President Barack Obama’s budget request includes a proposal to establish dedicated mandatory funding for the Land and Water Conservation Fund (LWCF), with full funding at $900 million a year beginning in 2015.

For 50 years, LWCF has provided critical funding for land and water conservation projects, outdoor recreation access and the continued preservation of our nation’s historic, cultural and iconic landmarks.

LWCF is not funded by taxpayer dollars. The US Congress made a commitment to the American public that a small portion of revenues from offshore oil and gas drilling would go to outdoor recreation and conservation as an offset for the depletion of resources that belong to us all.

This is a critical time for conservation because LWCF’s authorizing legislation expires on September 30, 2015, threatening conservation and recreation projects that are critical to American communities and our nation’s outdoor recreation economy.

In addition, the LWCF has funded protection of many other forests and their waterways such as the nearly pristine 21,000-acre Sterling Forest State Park less than an hour from New York City, and Vermont’s Green Mountain National Forest, one of the most popular areas in the northeastern United States.

You can make a difference! 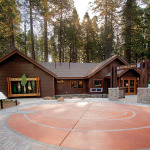 Now James and Carmen Hickling’s love for Calaveras Big Trees lives on through a generous bequest, which supported construction of the park’s new visitor center. The center hosted a grand opening last Memorial Day. This new center honors the legacy of those who preserved these groves in the past, and tells the story of the giant sequoias. 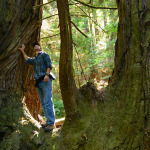 Less than 1 mile from the Pacific Ocean and the town of Mendocino, a two-track dirt road leads into a rare example of two forest types contained in one magnificent location: a pygmy forest and an ancient redwood forest that faces logging and development. See how you can protect the Big River-Mendocino Old-Growth Redwoods.