Living in Arnold near Calaveras Big Trees State Park, the late James and Carmen Hickling thought of the park’s amazing giant sequoias as their backyard. “They were very outdoorsy people,” said their nephew Donald Hickling.

“They were always generous, and they wanted to give back to the forest for all the great times they had there.” For decades during their lifetimes, most of their gifts to Save the Redwoods League supported the park’s interpretive center and the creation of a campfire area, where rangers give talks to visitors.

Now their love for Calaveras Big Trees lives on through a generous bequest, which supported construction of the park’s new visitor center. The center hosted a grand opening last Memorial Day. This new center honors the legacy of those who preserved these groves in the past, and tells the story of the giant sequoias. In addition, you can see cultural artifacts of native Californians, animal displays and a new film on the origin of California State Parks and Calaveras Big Trees.

The grand opening marked the 150th anniversary year of California State Parks, which are home to most of the redwoods that League members have protected. In fact, the League helped create the California state park system in 1927. At Calaveras Big Trees, gifts from members like you have enabled us to protect more than 2,300 acres including the north and south groves; create brochures for visitors; and support scientific research and education projects. 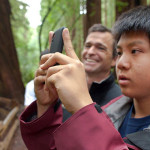 Your generous gifts make it possible for youths to experience the wonder of redwoods, enriching their lives and their health, and fostering the conservationists of tomorrow. Your new League Summer Bulletin shows how our new programs are helping to counter the trend of Americans’ detachment from nature. by Save the Redwoods League on November 4, 2014

Tell us what you think of our 2014 Annual Report in a short survey, and if you are among the first 100 respondents, you will win our exclusive 2015 redwoods calendar! Take the survey now!