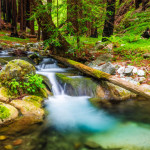 You have more amenities to enjoy at two breathtaking redwood state parks in Big Sur, thanks to support from League donors like you. Save the Redwoods League helped replace a failing footbridge at Limekiln State Park, and is continuing trail improvements at Pfeiffer Big Sur State Park. Learn about the enhancements and plan your trip.