You may remember that work began in summer 2014 on this trail that winds through the magnificent Garden Club of America (GCA) Grove, after GCA clubs and their members across the nation raised over $400,000 for the project. This latest effort builds on more than 80 years of partnership for redwoods conservation: The protection of this awe-inspiring grove began in the 1930s when The Garden Club of America (GCA) partnered with Save the Redwoods League to purchase four parcels containing 2,552 acres.

Over the next several decades the League, GCA and California State Parks partnered to protect more priority lands surrounding the initial acreage. GCA members and clubs were encouraged to contribute to the League to cover one-half of the land purchase prices, as they had done during the initial acquisition. The Garden Club of America Grove now contains more than 5,100 acres, the third-largest dedicated grove in the entire California State Parks system!

While the GCA Grove was protected from logging decades ago, recently it has been difficult for the public to explore and enjoy its towering forests. The 2003 Canoe Fire destroyed multiple footbridges of the River Trail. Landslides from storms followed in 2006, and devastating park budget cuts have prevented California State Parks from rehabilitating areas throughout the parks system.

In 2014, GCA Bridge the Gap campaign funds were used to support restoration of 2.5 miles of the 6-mile River Trail, including clearing underbrush, building retaining walls and regrading the surface. To minimize erosion and other environmental impacts, California State Parks has rerouted many areas of the trail to higher, more stable ground.

A Student Conservation Association crew did much of the trail restoration work under the direction of California State Parks. The SCA’s participation in the project bridges efforts by the League and GCA to involve young people in conservation to get them to know, love and care for forests in the future.

In the day-use area in summer 2015, the old bathroom was removed in preparation for its replacement. Five new picnic tables were installed, as well as trail signs directing visitors to the GCA section of the River Trail.

Several footbridges have been rebuilt; remaining bridges are scheduled to be rebuilt by summer 2016, the final portion of the trail work. All trail work and enhancements to the GCA Grove Day-Use Area are on track for completion by the League’s centennial and the GCA’s annual meeting in San Francisco, both in 2018.

Tricia Brown Fowler of Arkansas reflects on her generous donation to the restoration effort. “I was delighted to support this worthy project to restore access to these majestic trees; I decided to do so in honor of my wonderful grandmother and loving mother, both past presidents of the Little Rock Garden Club and incredible GCA ladies.”

See a video of the restoration and donate to the project now. 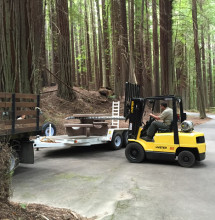 Five new picnic tables were installed in the day-use area. 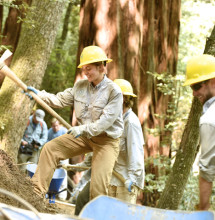 A Student Conservation Association crew did much of the trail restoration work under the direction of California State Parks. The long-awaited restoration of the magnificent River Trail in Humboldt Redwoods State Park took a huge leap forward recently! Crews finished the 6-mile footpath’s surface, and day-use area improvements are well under way, thanks to gifts from members like you.