Teresa Baker, a guest blogger for Save the Redwoods League, grew up in Richmond, California, as the only girl among eight brothers — a childhood experience that shaped her adult perspective to a dramatic degree.

“I had to compete,” Baker recalls. “I couldn’t let myself be outgunned by my brothers or the other guys in our neighborhood. I had to be right there with them, or they would have run right over me. They made me understand the necessity of standing up for myself.”

And there was another element in Baker’s childhood that informed her outlook: The urban and regional parks of the San Francisco Bay Area’s East Bay.

“My parents forced us to be outdoors,” she recalls, “and the parks were where we spent most of our free daylight hours. They were our playground and our refuge. We were always running around — we spent very little time inside.”

As Baker grew up, she began exploring various public lands including state and national parks. In 2013, during one of her many visits to Yosemite National Park, she was awestruck by the great granite walls and majestic cascades of Yosemite Valley. But something bothered her. “There was only one other African American I saw in the park during this visit, and that was Shelton Johnson, a park ranger,” Baker says. “That didn’t sit well with me. I reached out to Shelton and expressed my frustration to him, and he said, ‘If you see a problem, Teresa, address it.’”

So that’s what Baker did, founding the African American Nature & Parks Experience. She now arranges events throughout the country that connect people of color with the natural world.

“I partner up with various agencies to put together hikes, camping trips, and presentations by park rangers,” Baker says, “I also recognize that retailers and nonprofit organizations play a role in this work as well. Our public lands belong to everyone, and we need to ensure that everyone has equal access to them.” 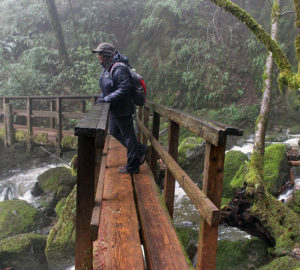 Baker, along with Robert Hanna (the great-great-grandson of John Muir), spearheaded the Muir Campfire Discussion on Diversity and Relevancy, a three-day meeting involving 20 different agencies and outdoor organizations. Baker and Hanna were the prime movers in securing recognition of the role played by African-American cavalrymen, or “Buffalo Soldiers,” in protecting Yosemite National Park during its early years by having the highway into Yosemite renamed Buffalo Soldier Memorial Highway.

“America is changing demographically,” Baker observes. “People of color will soon be in the majority, and we need to do everything possible to connect them to the outdoors, to help them experience the power of nature. If we don’t want to see redwoods chopped down by the hundreds for condominiums, we must get more people out in these spaces to love on them. Once you walk through the groves of these majestic trees, you don’t really need an explanation as to why they should be saved. Groups like Save the Redwoods League recognize that, and they really help to spread that message.” The Grove of Old Trees is Growing

The Grove of Old Trees is a 33-acre “island” of ancient redwoods surrounded by vineyards and homes in Sonoma County. And, with the help of Save the Redwoods League and LandPaths, this protected island just got 50 percent larger. In honor of Valentine’s Day, we’re thinking about the iconic redwood forest duos—those essential relationships between the trees, the environment, and the creatures who make the redwood forests their home. Can you guess any of these amazing duos?