This summer, Save the Redwoods League protected the largest old-growth redwood forest remaining in private lands. Its previous owners, the Richardson family, refrained from clear-cutting this 730-acre property for nearly a century.

As a result, the property, dedicated Harold Richardson Redwoods Reserve in honor of the family’s patriarch, contains a pristine and complex redwood ecosystem: slender young trees are interspersed among massive old-growth trees. One tree, estimated to be 1,640 years old, stands today as wide as a two-lane street.

The trees themselves are impressive, but they also serve as a backdrop for an astonishing array of wildlife. At Save the Redwoods League, we are interested in documenting that wildlife. With a better understanding of what dwells under (and in) the redwood canopy, we can make better management decisions.

Partnering with North Coast Resource Management (NCRM, Inc.), the League installed bat guano traps inside hollowed trees throughout the property. Several bat species live inside these hollows, which form when the center of a tree rots or burns.

“Hollows come in all shapes and sizes,” says Stephanie Martin, NCRM’s senior wildlife biologist. “Their depths and heights are all over the board.” Using genetic testing, NCRM might learn if different bat species prefer different types of hollows. In the meantime, Martin has already spotted one Townsend big-eared bat, a state species of special concern species, flitting from one large hollow.

Guano traps consist of weed cloth suspended inside the base of a hollow. If a trap collects a few guano pellets, it implies that bats are using the hollow as a resting place. Larger amounts of guano might indicate a group of bats, even an entire maternal colony, use the hollow for more consistent shelter.

NCRM is also busy surveying the property for the state and federally threatened northern spotted owls. Already, Martin says, biologists located a pair of spotted owls on the property, along with one barred owl. Owls, feeding on woodrats and flying squirrels, favor a more open understory canopy for hunting. At the same time, they often use old-growth trees with flat space for nesting. “The reserve holds great overstory structure and platforms for nesting and an open understory for foraging,” Martin says. Finally, one more winged creature piques the League’s interest. Does the marbled murrelet, a highly elusive and endangered seabird, make the reserve its home?

Specifically, the senior biologist deployed 4 ARUs, essentially preprogrammed microphones in a box, throughout the property. The ARUs automatically record 3.5 hours each day, at dawn and at dusk, when murrelets fly back and forth between the ocean and forest. Martin retrieved the ARUs in late August   and is looking forward to analyzing the recordings, hoping to pick up sounds of murrelets passing overhead.

ARUs are an exciting bit of technology, Martin says, considering the impracticality of the current standard protocol, which involves hiking into the forest before dawn, then sitting and waiting for murrelets to fly by and or vocalize in the early morning light.

Researchers have also found evidence of Sonoma red tree voles. (“It’s a tiny mammal that practically lives in one tree its entire life,” Martin says.) The vole peels the tough outer layer of Douglas-fir needles to get at the softer center. The resulting strands gather below the vole’s nest, like an arboraceous furball.

Eventually, the League will move from the sky to the streams, to survey amphibians and other aquatic life. For now, we’re still learning about and discovering wild plants and animals at Harold Richardson Redwoods Reserve.

Want to learn more about the wildlife in the redwood forest? Check out these wildlife wonders caught on camera and other recent discoveries. 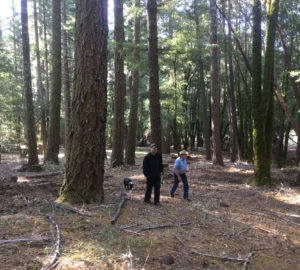