The new issue of Bay Nature has an article on the fantastic and ephemeral feature of our local climate — fog. The article, Demystifying Mist, describes the science of studying fog and conjures up images of misty forest days that are so familiar to me. Watching fog roll into the redwood forest and drip on the forest floor is an incredibly beautiful sight.

Many naturalists and scientists before me have mused over how important fog is for the coastal ecosystems of California. One of my favorite early papers on fog in California was written by G.T. Oberlander in 1956. He describes placing five simple bucket fog-drip collectors under the crowns of coast redwood, tanoak, Douglas fir trees on Cahill Ridge (San Francisco Peninsula) during July 1951. He measured how much fog dripped downwards from the tree branches and leaves into his collectors below. He found that the tanoak tree in his study dripped the most fog, partly because this tree stood in a place with significant exposure to fog drifting by. Oberlander used a method of catching fog that researchers like myself still use today.

Five decades later, we have more tools to study fog and yet we also have so many more questions to answer.  What is the future fate of fog along coastal California? If we get less fog, what does this mean for ecosystems like the redwood forest with a thirst for mist? We are keeping our focus on fog through our Research Program, learn more about our recent findings here.
Reference – Oberlander, GT. 1956. Summer fog precipitation on the San Francisco Peninsula. Ecology 37:851-852. 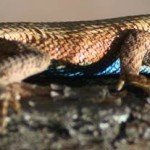 With all the talk these days about ticks and Lyme disease, it’s good to know that at least some creatures are looking out for us.  Blue-belly lizards (also known as the western fence lizard, or Sceloporus occidentalis) are a common … Continued 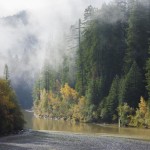