On March 11, 1918, Save the Redwoods League received its first donation.* Let’s take this opportunity to celebrate all that we’ve achieved and learned together since.

First and foremost, on behalf of the redwoods, I want to thank conservationists like YOU for the dedication which has helped the League protect over 190,000 acres of redwood forestland, establish and improve dozens of redwood parks, advance critical research on redwood ecology, and connect millions of people with these inspiring places over the years.

That first donation all those years ago reminds us what a remarkable time that was for our country: it was the beginning of the conservation movement, the birth of a landscape legacy shared by all of us. Within the span of a few years, we saw the creation of the National Park Service (1916), the founding of Save the Redwoods League, and the creation of the California State Parks system (1927). For a detailed timeline, visit this webpage.

Since that critical period, the League, our partners and you have worked together to achieve great things. Looking back, the redwoods that the League has helped to save tell a success story: they stand in places like Shady Dell above Usal Beach, Hendy Woods in the Anderson Valley, and Joaquin Miller Park in Oakland, and quietly reflect resilience, adaptability, and interdependence.

Right from the start, our predecessors realized that the answer to redwoods conservation lay in the lessons we learn from the redwood forests themselves: a commitment to taking the long view, to responding creatively to change, and to the power of partnership. These traits have fueled all of our successes and will keep us strong long into our second century.

Now, 96 years later, we have reached the next phase. It’s an exciting and challenging time, and we’ll need your continued vision and support to ensure the forests we love will stand tall and healthy for future generations. Tune in to my next blog post on March 20th to read about what’s next for the redwoods.

Thanks again for all you do for the redwoods.

*The donation on March 11, 1918 was the first of five initial donations from Stephen Mather, E.C. Bradley, Henry Fairfield Osborn, Madison Grant and William Kent.
Let’s keep in touch on Twitter! Follow me at @SamH4Redwoods for news and insights about redwoods and conservation. These days, I think it’s a pretty safe bet that many people spend more time on their cell phones — checking email, posting to Facebook, playing games— than they do out in nature. This trend seems especially prevalent among our … Continued 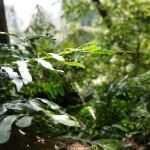 Humans have walked through the redwood forest for millennia, but we first journeyed into the redwood canopy mere decades ago. Recent advances in climbing technology now enable canopy researchers to safely access the highest reaches of the redwood tree tops … Continued