“Unless someone like you cares a whole awful lot,
Nothing is going to get better. It’s not.”
~ the Lorax

This famous quote by the title character of The Lorax is well-known in the world of conservation, and has likely left an impression on most who’ve read the book.

This classic Dr. Seuss tale (thought to be one of Seuss’s personal favorites) was originally published in 1971, around the start of the modern-day environmental movement. It does an amazing job of showing the interconnectedness of an ecosystem and how a disruption in one part affects everything else.

In The Lorax, Dr. Seuss also demonstrates the lack of forethought in actions that harm our environment, and the consequences that ensue when we don’t look at the big picture. What’s so unique and endearing about this book, though, is that its important environmental and political message is told in a humorous way, through wordplay, wild drawings and eccentric characters.

Dr. Seuss was not shy about expressing his personal views though his work. He penned political cartoons, and many of his books had underlying political messages. In Horton Hears a Who, for example, Seuss reminds us that “A person is a person, no matter how small.”

And, Yertle the Turtle talks about how all creatures have rights and should be free. The passage, “I know, up on top you are seeing great sights, but down here on the bottom, we, too, should have rights,” was one of the lines which caused the book to be pulled from schools at one time.

The man behind these famous books is Theodor Seuss Geisel, who was born in Massachusetts in 1907. In his lifetime he wrote and illustrated 44 children’s books, which have been translated into more than 15 languages, spreading his inspirational messages all over the world.

Today, we celebrate the birthday of Dr. Seuss and thank him for all he has done for the world of children’s literature. I remember reading Green Eggs and Ham and The Cat in the Hat as a child, moving on to Oh, the Places You’ll Go!, when I was off to college, and now I read The Lorax to my niece and nephews whenever I get the opportunity.

I think we can all remember to “speak for the trees, for the trees have no tongues” no matter what age we are. 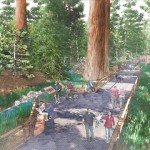 The towering giant sequoias of Yosemite National Park are the iconic trees that catalyzed our Nation’s conservation movement, inspiring Congress in 1864 to designate both the Mariposa Grove and Yosemite Valley “for public use, resort, and recreation”. Today, these mammoth … Continued Legal protection of the threatened marbled murrelet seabird was upheld this week by a federal appeals court. Despite a 15-year legal battle led by the timber industry to end the Endangered Species Act listing, marbled murrelets retain their threatened status … Continued