by Sam Hodder on March 22, 2017
Much can be said about David Rockefeller regarding his impact on the global financial industry, about his vigorous advocacy abroad for the United States, for his deep philanthropic engagement in his beloved New York City, and of the remarkable and iconic family legacy that has left such an indelible mark on the country and the world. But there is one element of David Rockefeller’s story that you will likely only read here: that he was there, standing among the redwoods with early Save the Redwoods League leaders when their conservation story began nearly 100 years ago.

Until his passing at the age of 101 on Monday morning, David Rockefeller was the last surviving grandson of John D. Rockefeller (Sr.), a founder of the Standard Oil Company and one of the most impactful American philanthropists of all time. Like his grandfather and father before him, and other exceedingly generous members of his family, David was committed to supporting many charities, giving away almost $2 billion throughout his lifetime.

In 1926, when David was only 11 years old, he traveled to California with his parents and older brothers to see the redwoods for the first time as part of a larger tour to introduce the boys to the nation’s incredible natural wonders. It was on this trip that David’s father instilled in him and his brothers a drive to protect the world around them — a sensibility that began with their grandfather.

“As Father traveled, if he saw things that needed to be done, he took steps and did something about them,” David would later recall. This trip to the redwoods was no exception. During a picnic-style meeting in the heart of the old-growth redwoods in what is now Humboldt Redwoods State Park, John D. Rockefeller, Jr. and Newton Drury, Save the Redwoods League’s first Executive Director, discussed the direction of the conservation movement in the region and what it would take to save the ancient trees.

Not only did this visit inspire the Rockefellers’ first gift to protect these forests, but they later went on to help the League purchase over 9,000 acres of timberland, with matching contributions from the state. By 1931, this grove, the largest contiguous stand of old-growth coast redwoods in the world, was saved from an impending harvest and, in 1952, it was named the “Rockefeller Forest” in honor of the family’s dedication to protecting it. You can see this forest in Humboldt Redwoods State Park. By the 1960s, the Rockefellers also made significant contributions to save groves in Prairie Creek Redwoods and Calaveras Big Trees State Parks as well as Yosemite and Redwood National Parks.

“To have a part in the preservation of these majestic trees was a privilege and gave me great satisfaction, which is only heightened by the receipt of the resolution which your organization conveys,” said John D. Rockefeller, Jr. in a letter to the League. “This resolution is especially meaningful, coming as it does from the organization which has so faithfully guarded these forests for many years.”

Nearly 80 years after their first trip to the redwoods, in an interview with the New York Times (external link), David reminisced about that trip to see California’s giant redwood trees for the first time. It was this trip that inspired so many of the family’s greatest conservation efforts. And David was there, bearing witness to the start of a long-term partnership with his family that helped create some of our most treasured and spectacular public parks — a legacy that endures as the Rockefeller family leads by example, saving the redwoods and more through their philanthropic efforts.

From the Grand Tetons in Wyoming, to Acadia National Park in Maine, to the Virgin Islands of the Caribbean, to the coast redwoods and giant sequoia forests of California, the Rockefeller’s conservation legacy is far-reaching. As we remember David Rockefeller and say “goodbye” to the last living attendant of that transformational meeting in the redwoods, we’re thankful for his family’s remarkable leadership that saved so many of our ancient redwood groves and in so doing, helped to catalyze the conservation movement of the last century.

One Response to “Generations of Generosity: Remembering David Rockefeller” 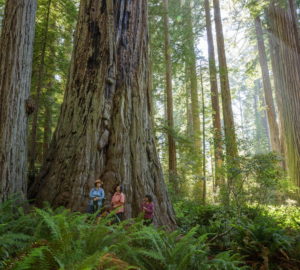 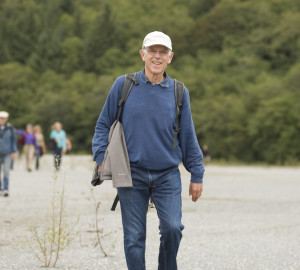