You cannot spend time in a redwood forest without coming across lichens. Only a few lichen species will catch your eye on the bark of a redwood but up in the canopy and on the forest floor an abundance of these organisms will surround you.

A few years ago we conducted canopy research at Muir Woods looking at lichen diversity at the tops of the trees. We also now have a state lichen. But recent research on lichens sheds a new light on what this organism is all about.

A lichen is commonly thought of as two different organisms, a fungus, which makes up the structure that you see, and an alga or cyanobacteria, which will photosynthesize and make food for the fungus. A recent study published in Science show that now a third organism, basidiomycete yeast (single-celled fungi) is also present in some lichens.

This new research shows that every day new insights into the mysteries of our biological world are being discovered. Even more reason to get our young people excited about science and nature. Who knows what they may discover one day?

I leave you with this cool video of a lichen being used as camouflage. 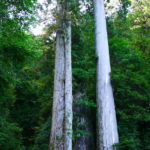 This week we bring you the coffin tree (Taiwania cryptomeriodes) or Taiwan cedar, one of the largest trees in Asia. This tree is found in forests in mainland China and Taiwan growing alongside plants not unlike those found in our coast redwood forests. 2 Responses to “Lichens in the News”