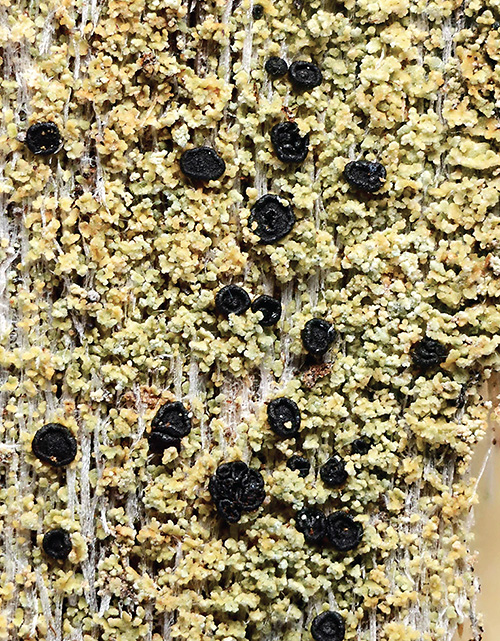 Another secret of the world’s tallest forest is revealed today with the discovery of a new inconspicuous lichen — Xylopsora canopeorum.

The species name itself is a literal celebration of the remarkable canopy environment this lichen inhabits (canopeorum). This minute, yellow to bluish white lichen has a crust-like form that grows on the bark of coast redwood tree trunks in the central part of the coast redwood ecosystem. While the rainiest, lush green canopies of the redwood rainforests in Humboldt and Del Norte County seem like the place where we would be most likely to find new species hidden in the wild canopy, this species is unique to the warmer and drier forest of Sonoma and Santa Cruz Counties.

We often fear biodiversity loss under the threat of climate change’s warmer temperatures and likely drier weather, but this new species is an exciting reminder that there are species specifically suited to a wide range of climatic conditions as it thrives in warm coast redwood treetops.

We have to marvel at how many other species remain undiscovered in these forests and continue our effort to catalog its biodiversity so that we can design the most comprehensive conservation strategies possible for the redwoods and the multitude of other species that call this forest home.

Save the Redwoods League is proud to sponsor research like this, to better understand the forests we are committed to protecting in perpetuity.

Learn more about what’s growing in the canopies of the tallest trees in the world and watch the video below. A Women’s Day Tribute to a Redwoods Champion

In honor of International Women’s Day, commemorated annually on March 8 to celebrate women’s achievements throughout history, Save the Redwoods League honors the late Wendy Hayward, a tireless advocate for the redwood forest. Did you hear that Lonely Planet named the coast redwood range the number one travel destination in the U.S.? If you’re eager to go, now you can enter to win a trip for two!