Grace Cathedral stands on top of San Francisco’s iconic Nob Hill. A large redwood altar has been a prominent feature of the Cathedral since 1964, inspiring many to wonder about the altar’s origin and the history of its wood.

Grace Cathedral archivist, Michael Lampen, confirmed that the redwood piece was originally showcased by the California Redwood Company in the Humboldt area in the 1950s and eventually given to the cathedral by Mr. George Livermore. But where did the redwood itself come from and how old is it?

To answer this interesting question, Redwoods and Climate Change Initiative researcher, Allyson Carroll, visited Grace Cathedral recently to see what she could decipher from a close look at the redwood altar’s wood. 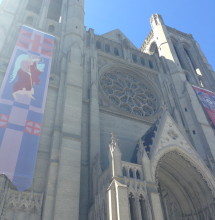 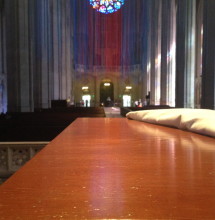 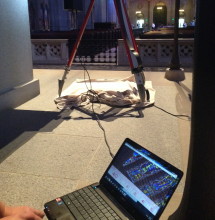 Allyson’s expertise in the field of dendrochronology (the study of tree rings) has helped us discover how the local environment leaves a distinct pattern in the wood of coast redwood and giant sequoia trees. Allyson hoped she would be able to age the wood and recognize what forest region the redwood tree likely came from based on the pattern of tree rings visible on the altar’s edge.

Allyson studied the number of tree rings and their relative thickness to each other within the altar and found a signature pattern dating the redwood to 1561-1684 A.D. The tree ring pattern visible in the altar also suggests the redwood did in fact come from a coast redwood forest in Northern California.

The Redwoods and Climate Change Initiative redwood tree ring archive is helping us track the response of redwood forests to changing climate, but is also helping us unravel mysteries like this one. Watch Allyson describe how she decodes redwood tree rings here. The Funny Thing About Trails…

It’s a funny thing about trails. For me, they carry a lot more significance than their linear simplicity would imply. Not just because I know firsthand what it takes to build them, but because through every phase of life and all … Continued Fans of the redwood forest have various motivations for supporting Save the Redwoods League. Some want to protect a place of peace and beauty forever. Others pitch in to restore the forests that have been lost to decades of destruction. … Continued