The last 12 months in California have been the driest on record since weather records began in 1885.

NASA’s Earth Observatory recently showed us just how seriously the drought is impacting Californian vegetation statewide from the redwood forest to grassy Central Valley. This MODIS satellite image shows where the vegetation in California  is less green than normal (brown) or more green than normal (blue/green). NASA is able to categorize “greenness” because drought-stressed plants reflect visible light more then unstressed plants and MODIS detects changes overtime as it orbits the planet.

If you look at the coast redwood forest region along the north coast, you’ll notice the color is primarily white, a color given to average “greenness” for this time of year. The redwood forest is mostly evergreen and redwoods keep their leaves all year long, even during droughts like the one we’re experiencing. In contrast, the central valley is shockingly brown, indicating that the annual plants that normally are growing vigorously this time of year are barely growing, if at all. Along the west side of the Sierra Nevada, where the giant sequoia forests are, the landscape appears greener than normal for this time of year. This is because snow typically covers this region in winter and hides the ground vegetation. These plants may have an extremely long, dry season ahead if snow doesn’t accumulate soon.

Click here for more on NASA’s drought index and here to learn more about our research on how climate change is affecting the redwoods. 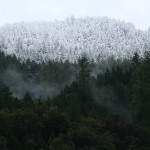 What Do the Winter Olympics and Redwoods Have in Common?

Well, they’re both part of a rapidly-changing world. It’s more than a little scary to watch the Winter Olympics this year and see the bare, snowless mountains in the background and the spectators in T-shirts lining the race courses. Scarier … Continued 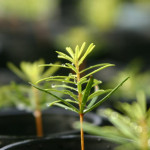 Last week’s blog began, perhaps a little cavalierly, with the assertion that growing big trees may be the easy part of redwood forest restoration, and so far as it goes that’s a fair assessment.  It also may be a little … Continued