Save the Redwoods League is kicking off its second century by doing more of what we do best. At the beginning of our first century, the League championed California’s iconic coast redwood and giant sequoia forests, helping to create some of the first redwood parks in the California State Parks system. In fact, the League led the voter campaign back in 1928 that provided $6 million in bond funds to create the California State Parks system we have today. We have always believed that everyone should be able to experience the awe-inspiring beauty of these giant trees. As we launch our Centennial, we count on you to help keep the movement to protect the redwoods going strong into the next 100 years!

The League joins California land trusts, conservation organizations and park partners to support the California Drought, Water, Parks, Climate, Coastal Protection and Outdoor Access for All Act of 2018 (SB 5 – de León). The $4.1 billion funding measure authored by California Senate President Pro Tem, Kevin de León, will appear on the June 2018 ballot. As the measure was being written by state lawmakers, the League worked hard with advocates and stakeholders to ensure that funding to protect, restore and connect people to redwoods was prioritized. If approved by voters, S B5 will provide much-needed investments in our parks and natural resources, including our state’s beautiful coast redwood and giant sequoia forests. This is the first bond measure in California to prioritize social equity, stating that access to parks and open space, along with clean, reliable drinking water resources, is a right for all Californians. We at the League agree.

If approved by voters, the SB 5 funding measure would enable the League to invest further in protecting redwood forests, caring for our existing redwood parks and improving access to them. The funding would also support the League’s work to restore logged forests so that they capture and store more carbon and protect sources of clean water. Stand with the League and vote YES for SB 5 in June!

If there is a park, wilderness area, or monument you love to visit, chances are it was created by the Land and Water Conservation Fund (LWCF). The LWCF is our nation’s most important conservation and recreation tool. For more than 50 years, this federal program has provided funding from offshore energy revenues to protect iconic places like Muir Woods and the Grand Canyon, build trails and parks, and conserve historic battlefields. Without using a single taxpayer dollar, LWCF invests in our quality of life, a booming recreation economy, and our history and culture. The LWCF will expire in September 2018, and it is up to each of us to let our members of Congress know that access to public lands is an American value that must be protected.

Join the League and the national coalition of conservation and recreation organizations working to protect this critical federal program: Learn more, call your member of Congress today, and ask that LWCF be permanently reauthorized and fully funded. With LWCF funds, the League plans to permanently protect the 15,000-acre Mailliard Ranch in Mendocino County, safeguarding more than 900 acres of old-growth coast redwoods. LWCF funds would also support the transfer of the League’s Westfall Ranch property to Headwaters Forest Reserve, expanding access to this iconic ancient redwood park on California’s North Coast. We can’t do this without LWCF, or without you!

Millions Speak Out for National Monuments, and Must Keep the Volume Turned Up

In early December, the Trump administration drastically reduced the Bears Ears and Grand Staircase Escalante National Monuments in Utah, a decision which represents the largest reduction in public land protections in United States history. More than 2 million acres of culturally significant wildlands are open to disposition and sale, potentially for drilling and mining leases, as of February 2, 2018. The land area removed from its protective “monument” designation is six times the size of Grand Teton National Park.

In addition to this action, the administration has signaled that further changes to a variety of national monument management plans and boundaries are likely on the way, though the criteria, timing, and scope of those changes are as yet a mystery. In the summer of 2017, millions of Americans submitted comments to the Department of the Interior, overwhelmingly in favor of preserving our national monuments, 27 of which were under review by the Department of the Interior Secretary, Ryan Zinke, as directed by an Executive Order from the Trump administration. Despite this historic outcry, the opaque process to undermine the permanence of our most beloved public lands continues.

As of publication time, no further announcements on the fate of our monuments have been made, leaving all of them at risk. Five lawsuits are underway, some of which are seeking injunctive relief to block the administration’s proclamation to reduce Bears Ears and Grand Staircase Escalante National Monuments and thus open the lands up to mining and oil and gas drilling. Numerous environmental organizations from the local to the national level are working to maintain protections for our national monuments, including Giant Sequoia National Monument, which Save the Redwoods League will continue to defend and help steward.

According to the Trump administration’s proclamation, at 9 a.m. EST on February 2, 2018, the lands removed from the Bears Ears and Grand Staircase Escalante National Monuments will be open to energy and mining development. Harm to one monument is harm to all. Let your members of Congress know that you stand with the League and want to keep our monuments intact! 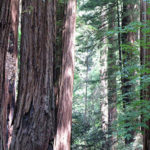 Congratulations to Muir Woods National Monument on its 110th anniversary January 9! This magnificent place near San Francisco is often where visitors from California and throughout the world see the coast redwood forest for the first time. Over a million tourists from across the globe stream into this treasured forest for a walk among its breathtaking redwoods each year. As you may have heard, starting on January 16, parking and shuttle reservations will be required. 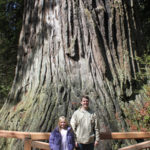 Win a Trip to See Giants

Did you hear that Lonely Planet named the coast redwood range the number-one travel destination in the United States? If you’re eager to go, now you can enter our contest to win a trip for two! Save the Redwoods League, Eureka-Humboldt Visitors Bureau and Parks Project are offering an incredible prize package. You can enter to win by simply telling us why you want to visit in just 25 words or fewer.