How We Restore Land and Waterways

Save the Redwoods League helps restore redwood forests by removing unnatural features that can harm plants and animals and by re-creating natural processes and structures lost through decades of human intervention.

In the turquoise waters of rivers running past the towering giants of coast redwood forest, salmon once were so abundant that some say you could catch them with your hands. Others say the salmon runs were so thick you could walk across the streams on their backs.

Big trees and big fish — coast redwoods, salmon and trout—depend on each other. Redwoods help provide the cool, clear streams that salmon need, slowing erosion that would otherwise cause sediment to suffocate the fish eggs in the gravel. The great trees also shade the water, keeping them cool, and redwoods fall into streams, creating calm, deep pools where fish take refuge from predators and fast currents. In turn, salmon supply redwoods and other plants with nutrients from their bodies after they spawn and die in their native streams.

Virtually all redwood forests have (or once had) streams in which salmon run and spawn. But after 150 years of damming, water diversion, logging and development, most of these fish species face extinction. 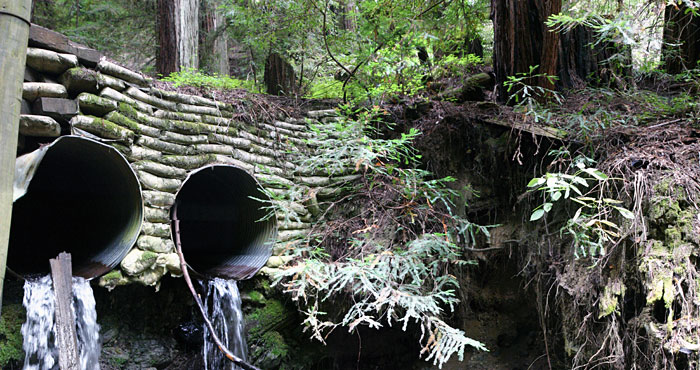 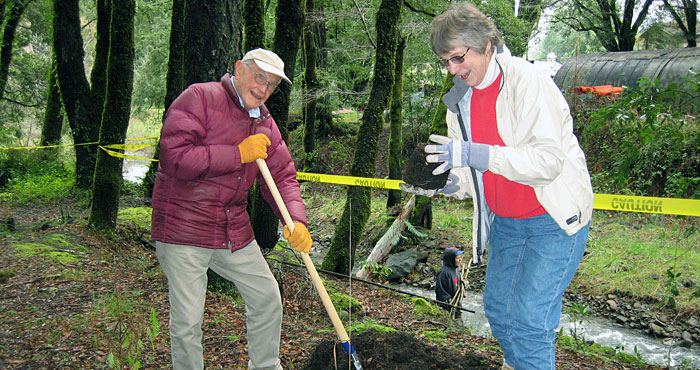 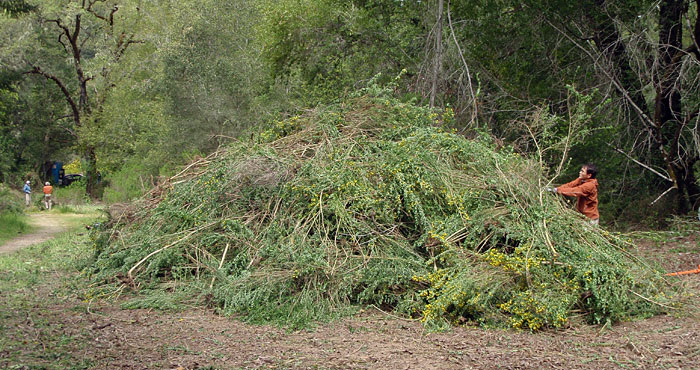 One way we restore damaged redwood forests is by restoring streams where salmon can live. Sometimes, stream restoration involves removing culverts that block fish from swimming up and downstream.

We also remove other unnatural features such as roads and invasive plants, which can harm native plants and animals. Sediment from rapidly eroding logging roads, for example, can suffocate fish eggs. We remove the road by restoring the land’s contours and planting trees on the site to control erosion. We also remove invasive plants such as ivy, broom and South American grasses, which crowd out native plants.

Sometimes timber companies have replanted trees too close to each other on land that we have later protected. These trees face too much competition for light, water and nutrients to grow into giants. Their growth slows, their needles and branches die, and whole stands become stagnant. By thinning these dense forests (cutting select trees), we are working to re-create the conditions within which these mighty forests have flourished for millennia as well as influence the optimal species composition of the forests of the future.

We also use thinning as a tool to in regions that are prone to natural wildfire. In these cases, we remove smaller trees that would ordinarily be killed by frequent, low-severity fires that were common but are now rarely allowed to burn unchecked. This type of thinning can help prevent more catastrophic fires.

Sometimes we use fire to restore parts of the forest such as prairies. Native Americans historically used fire to create prairies as open spaces for gatherings and to promote habitat for game such as elk and deer.

But in modern times, these regular burns were discontinued and natural fires were extinguished, resulting in changes to the prairie community’s plants and animals. Shrubs and trees that would ordinarily have been killed by fire instead encroached into the prairie, and invasive species carried in the guts of birds or the boots of hikers spread unchecked. Native plants suffer the consequences of competing for space and receiving less light under much taller plants. Many face extinction.

To restore the native communities of these prairies, we have a number of options. Prescribed fire is a widely used, though often misunderstood, tool that resets the clock on prairie encroachment and promotes growth of native plants.

Sometimes it may make more sense to mow a prairie instead. Mowing can often imitate grazing where grazers such as elk are no longer present. In areas suffering severe invasive species problems, it may be necessary to hand-pull individual plants or even apply herbicide to eliminate any roots that may resprout.

Many streams that run through logged redwood forests no longer support salmon because there are no trees to shade the water and keep it cool. A lack of redwoods to fall into the streams means a lack of pools where fish take refuge. To help fix these problems, we plant trees near the streams and place log structures in the water.

Establishing working forests is another way of caring for redwood land. As an alternative to selling his land to a developer or timber company and therefore allowing many young and old trees to be cut, a landowner can conserve his forest by allowing timber companies to harvest only select young trees. Meanwhile, an organization like Save the Redwoods League can help manage the harvesting so that timber is the byproduct of our restoration work.

Working forests are planned to provide open, brushy habitat not found in older, unmanaged forests. These open areas provide places for a full range of diverse plants and animals to live in the redwood region.

Because so few ancient redwood forests remain, much of our work in the future will involve restoring logged or otherwise altered forests.

You can support restoration by donating to our Redwood Land Fund. Help us set these forests on a path to becoming the magical forests they once were.