Redwoods in a changing climate

Climate change poses a new challenge to coast redwoods and giant sequoia – and we’re learning more about how these trees are responding.

Coast redwoods and giant sequoia have weathered many changes in their storied history, but the challenge of climate change is unprecedented. Climate change has the potential to affect nearly every corner of our natural landscape. Sea-level rise, drought, severe wildfire, extreme weather, and flooding – and the resulting impacts on wildlife and fauna have serious implications for conservation in California and beyond.

Throughout their current range, redwoods are encountering temperature increases. With rising temperatures, the coast redwoods may have less coastal fog, and the giant sequoias face reductions in snowpack and earlier annual snowmelt, which is a critical source of water. California redwoods will definitely be affected by climate change, but scientists are still working to better understand the extent to which they are likely to be affected, and how these affects might differ in different places across the range. Temperatures are expected to continue to rise, but changes to precipitation patterns are much less clear. However, even when precipitation increases, the increase in temperature may offset those gains due to increased evaporation. Overall precipitation is expected to become much more variable, suggesting that “hotter droughts” (lack of precipitation with higher temperatures than we have seen in past droughts) such the 2012-2016 drought in California are expected to become more and more frequent.

In addition to the direct effects of warming temperatures and drought to the trees themselves, climate change may have indirect effects via increases in wildfires, flooding and shifting relationships with pests and pathogens.

To get a clearer picture, Save the Redwoods League has partnered with researchers from a variety of institutions – including Humboldt State University, UC Berkeley, Natureserve, United States Geological Survey and Colorado State University – to explore critical questions related to redwoods and climate change. These partnerships, together with staff knowledge of the breadth of scientific literature, help guide the League’s conservation efforts as environmental conditions evolve.

Results thus far suggest have yielded some inspiring news: coast redwoods and giant sequoia are powerful allies in meeting the threat of climate change because of the massive amounts of carbon stored in these forests. These results demonstrate that protecting and restoring these forests should be part of the state’s overall effort to address the challenge of climate change. Protection and restoration of California’s redwood forests can also be an international model for capturing the power of nature to address climate change.

We have also learned that much of the old-growth grew faster than expected as the temperatures have warmed, even during California’s recent drought. This was a surprising finding that researchers do not yet fully understand.

In terms of vulnerabilities to future climate, the coast redwood and giant sequoia stories diverge. In coast redwood, there were some indications of minor drought stress at the extreme eastern and southern edges of the range. Scientists are keeping an eye at these “trailing” edges but expect most of the range to remain largely resilient for some time, given the exceptional growth patterns in most areas studied. In giant sequoia, we are seeing more indirect effects of climate change that are cause for concern. Three severe wildfires have burned into sequoia groves in the last five years, and decreased resilience due to drought stress may be shifting the effects of a native bark beetle on these mammoth trees from mere nuisance, to a contributor to monarch mortality. The League has spearheaded studies on these topics, and we look forward to sharing our results when they are ready.

Our coast redwoods and giant sequoia are inextricably linked to our identity as Californians, and their beauty is one of our greatest natural treasures. To preserve this natural legacy for future generations, it is vital that we understand the challenge of climate change and create science-based conservation strategies. The League is leading the way by funding and designing critical research questions that can help us best steward these special places. Check out the link below for further information on our Redwoods and Climate Change Initiative with researchers from Humboldt State University, and check back for future links on other climate related projects. 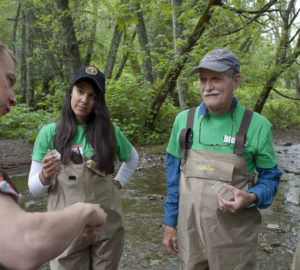 Check out the RCCI Field Notes pages for photos, videos, updates and more from the RCCI scientists in the field as they conduct their research.