All Aboard: The Skunk Train!

A Ride through the Redwoods with Members of the League

In 1885 the “Redwood Route” helped transport redwood logs from the rugged backcountry to the Mendocino Coast sawmills, and also played a vital role in transporting families and workers in logging camps along the route. Motorcars were introduced to the tracks in 1925, and the historic motorcars that carried these goods along the route earned the nickname “Skunk Train” as fumes from gasoline-powered engines and pot-bellied stoves made it so that locals could smell them before they could see them.

On Sunday, October 22, the League hosted its 2017 Annual Thank You Event, where Redwood Leadership Circle and Redwood Legacy Circle members took a ride through the redwoods of Mendocino County on the beautiful and historic Skunk Train. The train departed from Willits and descended into the Noyo River Canyon, all the while winding its way through California’s coast redwoods, past open meadows, through tunnels, and over bridges.

During our picnic lunch in Northspur, League President and CEO, Sam Hodder, addressed the extraordinary outpouring of support from League members to help raise $7.5 million for the purchase of the 426-acre property, which includes 123 acres (the equivalent of 95 NFL regulated football fields!) of ancient redwoods slated for timber harvesting in 2011. With our members’ generous support, the League was able to protect 30% of all remaining ancient and old forest in the Noyo River watershed — a remote forest, accessible to all aboard the Skunk Train.

It was wonderful to share that exact experience with dedicated members of the League from all over the country and learn more about each person’s connection to the redwoods. From members who remember riding the Skunk Train as kids to those who had never heard of the train until they had received an invitation to the reception, it was clear that all who attended were delighted and reveled in the company of our ancient giants. It is always great to reconnect with our members out in the redwoods as a reminder of why we are doing the work we have been doing for years. I look forward to seeing everyone again at our next event!

You can leave your own redwoods legacy to ensure that these magnificent forests are protected for future generations by visiting MyRedwoodsLegacy.org for more information! 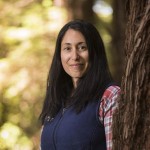 Sharon joined the League in 2006 and serves as the Director of Gift Planning. The combination of her fundraising experience and passion for redwood forests made her a perfect fit for the League.