by Kristen Shive on September 23, 2018
Giant sequoia are the largest living trees on the planet. Their size and magisterial presence inspire awe, connecting us to nature in a deep, even transcendent fashion. Though they now only exist in 73 groves scattered along the western slopes of the Sierra Nevada, they point to a lost world that was populated by giants.

Sequoiadendron forests once covered much of the northern hemisphere; dinosaurs foraged and hunted through them. They are both a bridge to ancient geological epochs and one of the great existing treasures of the natural world, comparable in significance to the Great Barrier Reef, the Amazon and Ituri rainforests, the North American and Siberian Arctic — and of course, the coast redwood forests of northern California.

The good news: at least two-thirds of the ancient giant sequoia forestland has been protected. But their future is by no means assured. The threats from climate change, air pollution, catastrophic wildfire, and development are real and unrelenting. Assuring the continued health — even existence — of our giant sequoia groves will require progressive forest management and an ongoing commitment of resources through the next century and beyond.

It will also require informed and dedicated constituencies — and that, in turn, demands strong educational programs. Without the means of teaching inquisitive students about the wonders and significance of our giant sequoia, we will lose committed advocates, and ultimately, the trees themselves.

That’s why everyone at Save the Redwoods League is so excited about the new giant sequoia curriculum for K-12 classrooms offered by the California State Parks PORTS® program, which stands for Parks Online Resources for Teachers and Students. This distance learning program features the giant sequoia of Calaveras Big Trees State Park in its new unit and uses an innovative system incorporating interactive media and virtual reality platforms to teach about the ecosystems, wildlife, and history of California State Parks.

“The PORTS program is great as it serves teachers and students in so many different ways,” says Deborah Zierten, education and interpretation manager of Save the Redwoods League. “It provides students with a valuable opportunity to hear firsthand from a park interpreter and learn about the forest if they cannot actually visit it. Or it can be a great introduction if the class is able to go on a field trip to the redwoods. Students find redwoods fascinating — thrilling, even!  They understand the importance of conservation intuitively when they’re presented with the facts.”

Save the Redwoods League helped State Parks create one of the first PORTS units, a curriculum on redwood ecology. Now, during our Centennial Year, we are contributing to the development of a giant sequoia curriculum centered on Calaveras Big Trees State Park, one of the state’s flagship parks. Through programs like PORTS, we can ensure our giant sequoia will have the champions they’ll need to thrive through the next century and beyond.

Learn more about the PORTS program and sign up for a distance learning adventure today by going to SaveTheRedwoods.org/PORTS. 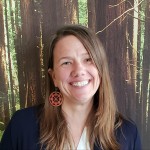