I don’t get out to the woods for work nearly enough these days (then again, who does?), but last week was an exception.  During a trip to the Northern California forests for some meetings, I was lucky enough to get out to three very different sites that together paint a remarkably hopeful picture for the future of the redwoods.

My first excursion was a tour of several forest restoration projects in Redwood National Park.  The National Park contains large areas of young forest that through judicious thinning and planting are being set on a path to someday regain the characteristics of the ancient forests they once were. Accompanied by Park staff, I toured several stands that had been treated over a range of about thirty years.  While the recently thinned stands had the sparse, raw look and feel common to any freshly done work in the woods, the effort’s success was apparent in the stands thinned in the early 1980’s.  Trees merely fifty years of age stand as tall and proud as those of a far older vintage.  A diverse understory of sorrel, fern, and trillium blankets the ground, and fallen logs provide homes and sustenance for the creatures at the foundations of the food web.  An adjacent untreated stand provided a stark contrast – its floor barren, its dense trees frail and weak.

The following day I visited a pair of older, though still relatively young, forests that illustrate the potential for commercial management to promote many of the goals we usually reserve for government agencies or conservation groups.  Both stands were around 90 years old; one had not been managed, the other thinned four times under a regime designed to continually improve both the timber and the ecological resources of the stand.  Looking up, it’s hard to tell the difference between the two: great trees rise high overhead, their crowns filling the sky above.  Casting our eyes closer to earth, however, the effects of thoughtful, long-term management become clear.  The small gaps created by the removal of trees have allowed new trees to take their place in the understory.  Over time, these trees have grown and others have established, resulting in a dense and layered canopy desired by many wildlife species.  Trees of all ages flourish and grow, and the air is thick with birdsong.

I had a couple hours to kill on my final day in the north country, and I took the opportunity to make an early-morning trek to Prairie Creek State Park. If you haven’t been to the ancient forests of Prairie Creek, go and walk the Cathedral Trees trail.  The old growth there is the epitome of forests, and its redwoods the epitome of trees.  It is truly one of the holiest of earthly places.  I could see in this ancient forest the realization of the work we must do in our younger forests, though we will not see its results in our lifetime.  I was struck by the power of the League’s mission, the vision and passion necessary to not only protect the ancient forests of today but to restore those of tomorrow, and how lucky I am to be a part of it. 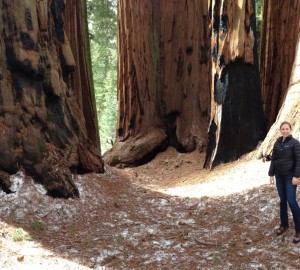