Learn What You Know and Don’t Know

As surprising as it may seem, the shaded areas on park maps indicating different kinds of habitat and vegetation do not always reflect the reality “on the ground.” This is true for Redwood National and State Parks, which contains a great deal of old-growth redwood forestland protected by Save the Redwoods League.

This summer, as volunteer “Explorers in Residence” for the League, we will be able to offer some “ground truth,” and possible corrections to the current maps. We will walk as much of these vast forests as we can and report our findings.

This data may prove helpful in the League’s restoration and protection of these precious old-growth redwoods and their unique ecological community. This effort is the beginning of what we hope will become a long-term project to better understand these magnificent forests.

As “Explorers in Residence,” a pretty cool title for volunteers, our first task is to learn in-depth about the redwood forest. For starters, the four most common giant trees here are the coast redwood, Sitka spruce, western hemlock and Douglas fir. (Three of these are among the five largest trees on Earth!)

Seems simple enough, so guidebooks in hand, we attempt to successfully ID the trees we’re seeing. A helpful ranger corrects one of our attempts, and we’re starting to feel a little lost. Maybe it is difficult after all? We keep looking from tree, to book, to key, to tree, book, key, tree… and we’re making progress!

Now we make it a game, identifying each tree as we drive the park roads and walk through the forest. Flowers, ferns, fruit, fungi and frogs are fun to learn too, but these will be more complicated! It seems like each time we return to a habitat, we start over. We know that we have much to learn. That’s fun!

Fog clears and we scan the silent vista, attempting to see individual trees in this vast forest. Our mission for the next month or so is to compare the “green areas” that denote old-growth redwoods on maps with what we really find there, and to suggest boundary revisions based on those results. Pretty simple, except that there are miles of forest to cover!

We start by walking a trail following a stream valley and checking where the redwood groves begin and end. Easy enough when the flat leaves of hemlock or the stature of Sitka spruce don’t fool us, when the fog allows us to see up the hills, and when the undergrowth allows us to see through to the tall trees above.

A couple of days ago we took a hike completely around a green region on the map. Our first leg of the hike was straight up over giant, downed logs and around drainage gullies, meandering from giant redwood to giant redwood. The GPS readily marked the boundary line between these special trees and all of the others.

But then the woods became dense with an impenetrable understory of 8-foot-tall bracken, lady ferns, honeysuckle bushes, wild cucumber vines and much more, all growing wild over the rubble of ancient fallen trees. We discovered that the only way through all of this was to follow well-worn black bear trails. Bears scratch their way over logs, leaving telltale marks and patches. Bears tunnel through the understory, so we crawled through where we couldn’t walk. The bears tromp rings around the largest redwood trunks, circling many times, which makes it easy for us to approach and mark the old giants.

Along their way, bears also scratch and peel the bark off young redwoods and leave giant piles of berry-rich scat which provide nutrients for a genus of fungi, Coprinus, now fruiting delicately in the black goo. The results of bears’ behaviors are fun to study and photograph, but we must stay focused and find the next boundary old-growth redwood.

Curiosity and the Bear

A long trail led us through one of the map’s green areas showing old-growth redwoods. We found some old trees were they were not indicated on the map, and we also found no old redwoods in the green regions where they were supposed to be. Exciting — we were making progress! As we headed toward the Pacific Ocean, ascending through dense forest, we discovered an area where loggers had long ago cut the tallest of the old-growth trees, leaving 10-foot-high stumps with little toe-holes carved in their sides. These stumps are now covered with furry hats of other trees and bushes, standing oddly among the stately 200-foot-tall Sitka spruce.

As we walked along for the next 20 minutes or so, we found only young redwoods in this non-green map area. Near the crest of a hill we came to a grove of dead giants, all of similar size and age, all with tops broken off 20 to 80 feet above their bases, and all scarred and hollowed out by fire. These trees faced the Pacific Ocean and the gale force winds that blow in from the sea. Among the remnants of these ancients, we found many healthy young redwoods, 18 to 24 inches across. None of this area showed evidence of having been logged. What happened here long ago?

We imagined a story, as we walked and photographed. Perhaps more than 1,000 years ago, when these old trees were thriving, a massive wind storm blew ashore and snapped off all of their tops. Then, maybe a few hundred years ago — before the younger Spruce and other trees which stand today began to grow — a catastrophic fire may have finished off these trees, and Sitka spruce and western hemlock grew to take their place. The adjacent miles of pristine redwoods we walked today were spared. Perhaps man is not the only force which has removed old-growth redwoods, turning green areas of the map to brown.

These Are Some of Our Favorite Things

The foot-high Sitka spruce sapling gracefully sprouting on a giant old-growth redwood log along with three fern species, lichens and huckleberries. The bugling of Elk (mating season is about to begin) and little calls of fawns to their mothers livens our nights. The red-legged frogs (named in July 2014 as California’s state amphibian) that let us capture and put them in a bit of a “trance” so they stay perfectly still while we photograph them — we have seen at least ten already. And finally, the pileated woodpecker’s slow, strong drumming high in the oldest trees, breaking the forest’s silence.

Follow our adventures as League “Explorers in Residence” by subscribing to this blog. You can also find pictures of natural history from our travels on our gallery at ExplorerDJ.SmugMug.com.

In addition, if you want to learn more, check out this great resource: The Redwood Forest: History, Ecology, and Conservation of the Coast Redwoods, R.F. Noss, ed, 2000, Save the Redwoods League. Bats at the Redwood Treetop 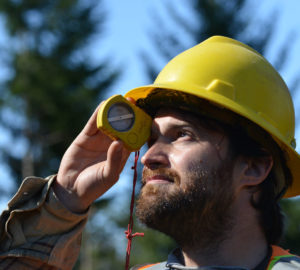 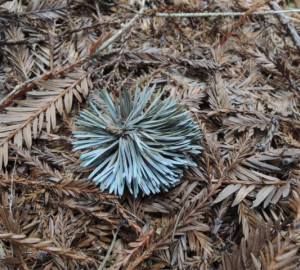