The Garden Club of America was founded in 1913 and has provided tremendous support for the redwoods. The Club began campaigning to protect California’s redwoods in the 1930’s and in 1934 dedicated a magnificent honor grove at Humboldt Redwoods State Park. If you didn’t make it to Chelsea this year to see the exhibit, go see the redwoods in the Garden Club of America Grove at Humboldt Redwoods State Park! Listen to an Oral History of Stewarts Point

Stewarts Point Ranch, a property we own and protect in northern Sonoma County, has a long and interesting history. The Richardson family settled at Stewarts Point in the 1860’s. Recently, a wonderful oral history project called “The Story Shed” interviewed … Continued 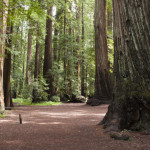 There is a ray of hope for California’s underfunded State Parks system:  a new high-level commission is being appointed with a mandate to transform the system – soon. As those of us who work in the system know, the State … Continued