If anyone knows the value of parks to community health and individual well-being, it’s Sharol Nelson-Embry, the Supervising Naturalist at the East Bay Regional Parks Crab Cove Visitors Center.

Nelson-Embry has worked at the visitor center for 24 years, bearing daily witness to the profound and positive impacts the district’s spectacular public lands exert on visitors from the Bay Area, the state and beyond.

“We enjoying sharing the story of our parks with everyone, but it’s especially gratifying to work with children from underserved communities,” says Nelson-Embry. “For many of these kids, a visit to one of our parks is their first real experience with nature – you can see their eyes light up when they walk along a trail or see their first redwood grove.”

The District operates 65 parks encompassing 113,000 acres in two counties, and Nelson-Embry incorporates eight of the largest and most popular parks in her educational programs. That’s a big job.

“Our biggest challenge is not having enough staff,” says Nelson-Embry. “There’s tremendous interest in our naturalist programs, but we simply don’t have enough district employees to accommodate the demand. That’s why our partners in the private sector are so important.”

Nelson-Embry cites her work with Deborah Zierten, Education and Interpretation Manager at Save the Redwoods League, as an example of a collaboration that pays major dividends for the district and park visitors.

“Deborah has worked with us before on our educational projects, and she’s now helping pilot new programs aimed at getting older kids from under-resourced schools out into the parks, including Redwood Regional Park,” Nelson-Embry says. “One of the things she’s developing is a phenology program – monitoring when different plants come into bloom and tracking the dates. We can then look at the relationship between the different species and their bloom dates, compare them to previous years, and see if there’s any linkage to climate change. We’re extremely grateful for her expertise and energy.”
Nelson-Embry is a champion of all the district’s parks, of course, but she acknowledges a particular fondness for Redwood Regional Park. 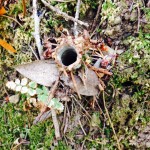 Turret spiders are related to tarantulas and part of a larger group of folding trapdoor spiders. They are found only in California and live in moist forests, often near streams. The coolest thing about these spiders is the burrows they build. Christmas is coming and so like last year, I’m answering the question that arises when we sit around our decorated trees: Why are Christmas trees shaped the way they are, pointy on top and wide at the bottom?