by Garrison Frost on October 1, 2019
This strange little thing is called a snowflower or snow plant, and it is found fairly commonly in giant sequoia forests and other coniferous montane areas of California, Oregon, and Nevada. These common names are far friendlier than its scientific name, Sarcodes sanguinea, which translates roughly to “bloody flesh-like thing," in reference to the bright red color of the entire plant.

I found these under a group of giant sequoia at Alder Creek last summer. It was fascinating, in a place where looking up is so mandatory, to find something so unique by looking down.

How the snowflower comes to exist is kind of interesting. It doesn’t produce chlorophyll, and is instead fed from fungi that lives underneath the soil. These fungi actually live in a symbiotic relationship with the giant sequoia and other coniferous trees. The trees use them to bring water and minerals to their roots, and the fungi gets some of the products of its photosynthesis. The snowflower takes advantage of all this by parasitizing the fungi of the photosynthate from the tree. In a way, the snowflower is a parasite of the tree itself, which is why you’ll always see them near the conifers, poking up out of the ground.

The Forest Service has more about this plant, if you’re interested in learning more.

Anyway, all this makes for a very cool plant, the visible portion of which is all red, and about a foot tall. Look for them next time you’re in the big trees. One Response to “The bloody flesh-like thing” 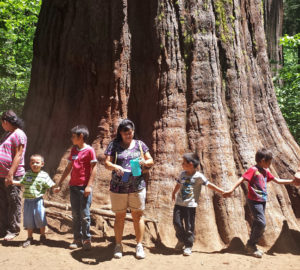 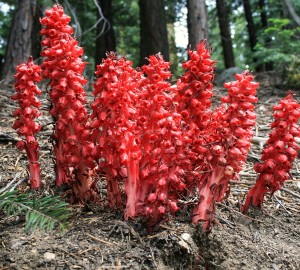