Burned out but not fading away

It’s fairly difficult for me to imagine living for 3,000 years. Yet giant sequoias live for millennia, standing tall in a single location as the years, decades, and centuries tick by. They are pounded by rain, snow, sweltering heat, lightening, and forest fires. I know that I could not handle such adversity and absolutely love seeing how these resilient trees continue to grow after spectacular affronts by nature.

At Mountain Home Grove, in the Sierra Nevada Mountains, our Redwoods and Climate Change Initiative researchers are studying the growth rates of redwoods like the ones pictured here. In the center of the photograph is a very burned-up giant sequoia that is not at all dead.

Redwoods are much more tolerant of fire than other tree species – just another reason redwoods are so cool!

Visit the Giant Sequoias fact page to learn more about these massive and resilient trees. Redwood seedling gifts for the holidays!

by Jennifer Benito-Kowalski on December 6, 2012

If you’re still wondering what to get for the friends and family on your holiday shopping list, consider having a redwood seedling planted in their honor! I think this is one of the most special gifts out there (ahem, if … Continued 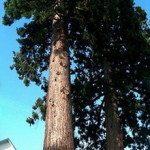 We regularly receive stories about the redwoods from League members and supporters.  Recently we received one from a member who joined the League in 1947.  The story made me wonder if humans are sowing the seeds of a much broader … Continued