As you may have read in their recent blog, Doug and Joanne Schwartz – League members and dedicated volunteers – are serving this summer as our Redwood Explorers-in-Residence, exploring the northern parks, and ground-truthing and mapping the groves of ancient forest they find. Along the way, they’re documenting the many interesting plants, animals, and fungi they find in Redwood Watch, and blogging about their experiences.

As if that weren’t enough, from time to time I get an email with a photo of some biological oddity or other (usually something I can’t myself identify). This photo in particular caught my eye. One, because it is truly strange, and 2) because it represents one of the coolest and weirdest biological phenomena I know.

The strange plant part in the photo is called a gall. A gall is a structure that a plant creates, not of its own accord, but after being induced to do so, usually by an insect or a mite. The animal injects a particular chemical into the plant, and the plant responds by growing a very distinctive, protective structure that provides shelter to the animal. Often, the galls are also filled with nutritious starch, feeding the growing larvae as well as housing it.

This particular gall was found on a Sitka spruce, and is known as a Cooley spruce gall. In it lives the larvae of a spruce adelgid, and insect much like an aphid. The galls are induced generally on the new growth of the trees, and are but a single phase of the adelgid’s two-host life cycle (the other host is Douglas fir).

While definitely a curiosity, the galls don’t affect the growth or health of the tree in any substantial fashion. So, if ever you see a strange growth on a plant, consider whether it could actually be the home and pantry of a growing insect!

Get involved and help us track these fun forest oddities with Redwood Watch today! 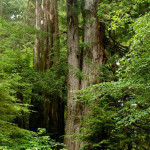 Learn What You Know and Don’t Know

As surprising as it may seem, the shaded areas on park maps indicating different kinds of habitat and vegetation do not always reflect the reality “on the ground.” This is true for Redwood National and State Parks, which contains a … Continued In the redwood forest, one of the most fabulous transitions every year is seeing spring flowers give way to sweet berries. While I know that I should probably leave the fruit for wildlife, I simply can’t help but taste the … Continued