A giant sequoia can grow for more than 2,000 years and in that time easily earn its reputation for being one of the most massive trees on Earth. While the giant sequoia’s sheer size is certainly amazing enough, these giants continue to impress even after they die.

We call dead trees that are still standing upright in the forest, “snags“. These massive columns often maintain much of the living tree’s original stature, but over time both wind and fire break off parts of the dead tree and reveal bare wood. When this happens, insects and fungi slowly soften the tree and countless birds and other animals take shelter in newly formed cavities inside the snag. Often woodpeckers lead the way, drilling holes into the sides of the tree trunk. Woodpeckers create nests for themselves inside snags and these nesting nooks are later used by other birds that eager to shelter in safety of giant sequoia.

I love walking up to the base of a snag and looking for signs of the critters that have taken up residence in this giant tree from another time. These snags are each an ecosystem in their own right! Next time you’re in the forest, peek inside a woodpecker’s hole to check for a nest or glance up inside a burned-out cavity to see if any bats are sleeping inside. 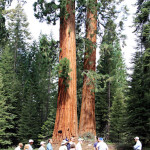 25 Years of Controversy amid the Monarchs

I just got back from a trip to see the cinnamon-colored giants of Mountain Home Demonstration State Forest in the southern Sierra. It was a real treat to explore a giant sequoia grove for the first time, especially when accompanied … Continued